Anxiety among headteachers peaked after partial school closures and phased reopenings were announced, but teachers’ wellbeing stayed “largely the same” during lockdown, according to a new study.

Analysis of survey data collected by Teacher Tapp by UCL and paid-for by the Nuffield Foundation found that 38 per cent of heads reported “very high” work-related anxiety in the week before school lockdown.

Forty per cent then reported the same feeling when the government announced plans for phased reopenings from June.

This compared to rates of between 13 and 17 per cent between October half term and mid-March.

Although rates of very high anxiety among teachers also peaked before the lockdown, and again to a lesser extent before phased reopenings, teachers actually reported lower anxiety rates after lockdown started than they had felt beforehand.

The study’s findings follow those from another study by Education Support, which found more than half of teachers said their mental health had declined during the Covid-19 pandemic, with the lack of timely government guidance cited as their biggest challenge. 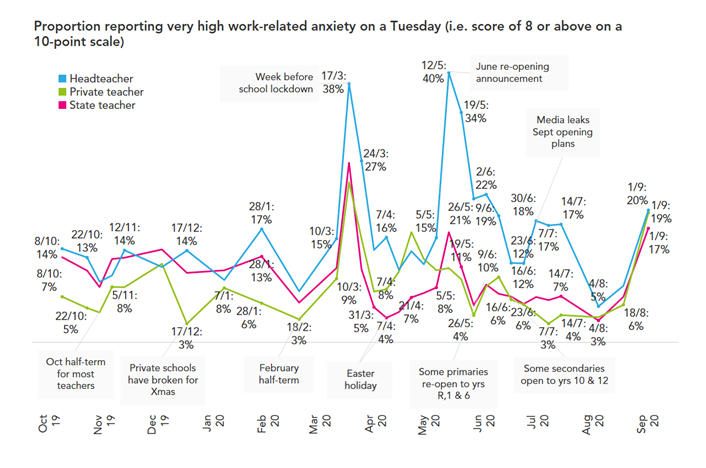 The report concluded that the sharper rises in anxiety among leaders was “likely due to having to manage a number of novel complex administrative and pastoral tasks”, and because their duty of care towards their staff and students “likely became hard to manage”.

Geoff Barton, general secretary of the school leadership union ASCL, said he was “particularly concerned about the fact that many school leaders are clearly under huge strain” as they have “had to spin a lot of plates over the past few months, and have hardly drawn breath since March”.

Barton pointed to leaders having to maintain provision for key worker and vulnerable children throughout the crisis, while also providing remote learning for everybody else, phasing back in more pupils in the summer term, and then preparing for full reopening in September.

“They have no problem with any of that and have responded to these challenges with great commitment and professionalism,” he added. “What has been harder to swallow has been the government’s chaotic handling of education throughout, and a vast amount of constantly updated guidance, which is in itself a full-time job to follow.”

Schools Week revealed in early June that school leaders had had to read almost 100 updates to government guidance in the first few months of the coronavirus crisis – a quarter of them published during antisocial hours.

The UCL study found that one in five headteachers said the experience of lockdown had made them “more likely to seek to leave the profession”, compared to one in ten middle leaders and teachers.

The research also found it was “noticeable” how heads’ anxiety “often rose in response to rumours rather than policy changes”.

For example, it rose on July 21, in response to the media leaking the plans for September re-openings, which were then confirmed later in the week.

Report co-author Professor John Jerrim said it was “reassuring to see that [teachers’] wellbeing – and particularly their anxiety about work – does not seem to have been affected by this difficult period”.

However, the research also points to an alarming uptick in anxiety among teachers and heads coinciding with the wider reopening of schools in September.

Jerrim added: “The government needs to keep a close eye on this during the months ahead, taking the necessary steps to support teachers through this unprecedented time.”