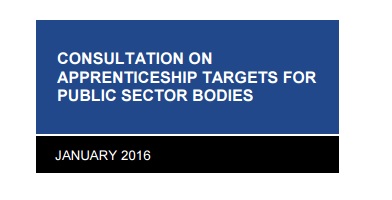 Schools have been named in a consultation document as one of the public sector organisations likely to have to hit tough new government targets for apprenticeship recruitment.

The document unveiled today explained how most public sector bodies employing 250 or more people in England will need to recruit 2.3 per cent of its headcount as apprentices.

It said: “Schools which are maintained by a local authority and where the local authority is also the employer are expected to be included in their own local government target.

The nine question consultation paper explained that “as a starting point for determining an appropriate target for public sector organisations”, the government had “taken the current proportion of public sector workers in the total workforce in England (16.2 per cent)”.

It added that most NHS bodies, local authorities, all police and Armed Forces, and the vast majority of fire and rescue services would have to hit the target.

Further education colleges are not mentioned in the document.