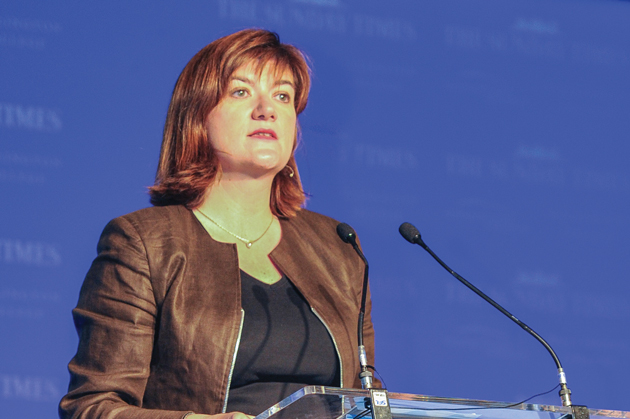 A “major review” of how mass migration has affected schools will now be rolled into a wider look at inclusion and extremism, prompting fears the issue will be buried in the run-up to the EU referendum.

The review, first mooted by Nicky Morgan (pictured) in an interview with The Telegraph a year ago, was due to look at the effect that the influx of migrant and refugee children is having on England’s schools.

But the Department for Education (DfE) this week told Schools Week that the review, which it claims is still ongoing, will now form part of a wider investigation by Louise Casey, head of the government’s troubled families unit. No date for her report has been set.

Migration is often blamed for deficit of primary school places in England, especially around the time of year that parents find out which schools their children have got into. But tensions and debate around the issue are running higher as a result of campaigning around the UK’s future membership of the EU.

Priti Patel, the employment minister, is among the high-profile Vote Leave campaigners to have linked the two issues, claiming the shortage of primary places is “yet another example of how uncontrolled migration is putting unsustainable pressures on public services”.

The UK Independence Party has called for the report to be released before voters go to the polls on June 23, and has accused Whitehall of putting off its publication.

Paul Nuttall, the party’s deputy leader and education spokesperson, told Schools Week it looked like the government was “deliberately shuffling its cards” to ensure the review was not published until after the referendum. It was “another example of the government shifting the goalposts.

“They are shameless and are using every lever of power that they can get their hands on to pull the wool over the public’s eyes.

“They are contemptible, and transparently so in their treatment of the electorate as children for whom information is not a right but a privilege.”

Unlike some of her cabinet colleagues, the education secretary is a firm supporter of Britain’s continued membership of EU, and last month made a high-profile intervention into the debate, claiming opportunities for English pupils could be diminished if the vote is to leave.

A DfE spokesperson said: “It is absolute nonsense to suggest we are refusing to publish a report on immigration. The research is not complete and we have instead asked Louise Casey to consider education and immigration as part of her wider review.”