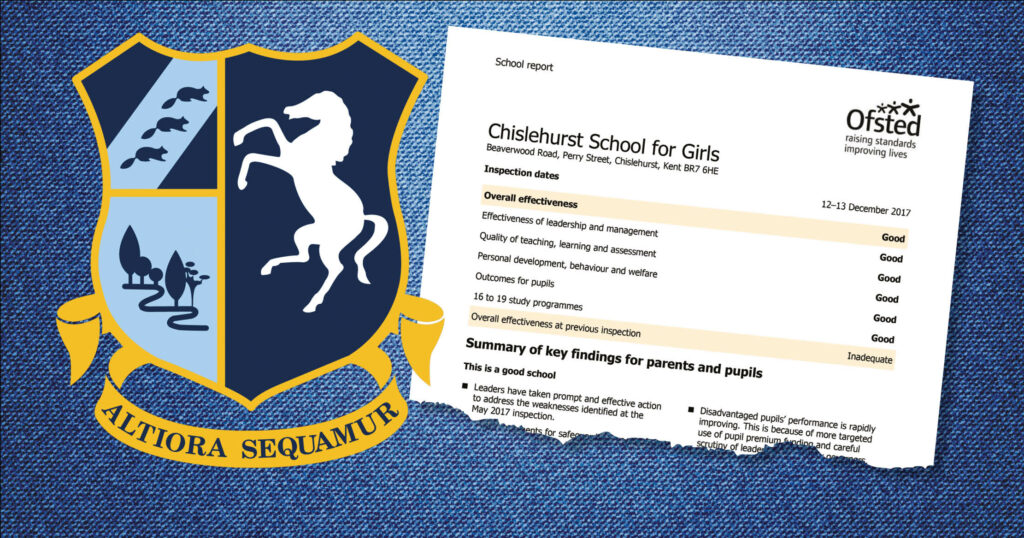 A Kent school that managed to suppress an ‘inadequate’ Ofsted report for eight months by threatening legal action has now been rated ‘good’ across the board after the watchdog opted to reinspect rather than fight in court.

Ofsted has recently published two inspection reports on Chislehurst School for Girls. The first, based on an inspection in May last year, returned the worst possible grade, though the second, based on a December inspection, saw significant improvement.

Both reports were published on January 30. Now a Schools Week investigation into the unusual situation has revealed that the original report was delayed for months by the school’s legal threats.

Legal experts warned last year that schools are now more likely to attempt to block negative Ofsted reports in the courts after a landmark in the High Court ruling recently quashed another school’s ‘inadequate’ rating, that of Durand Academy in south London.

Chislehurst School for Girls was first inspected on May 23 and 24 last year, dropping it two ranks from the ‘good’ grade it had held for around two decades. Inspectors were particularly critical of pupils’ personal development, behaviour and welfare, the school’s leadership and management, and the quality of 16-to-19 study programmes.

However, the school did not receive a copy of the report until September, and subsequently threatened legal action to prevent its publication. Ofsted capitulated on a court appearance, agreeing instead to reinspect the school in December.

“We sent the report to the school in September in order to publish our findings to parents,” an Ofsted spokesperson said.

“The school threatened legal action against publication on our website. While our legal representatives analysed the merits of spending public money defending our report, the school acted to make improvements.

“We took the decision to conduct a second inspection of the school but insisted on publishing the first report in order to be transparent.”

A spokesperson for Chislehurst School for Girls told Schools Week that governors “believed that the overall judgement of the May inspection was not a true reflection of the school”.

Ofsted’s criticisms “referred largely to medical needs planning, following the loss of Bromley’s school nursing provision earlier in 2017”, something that has now been addressed with the appointment of a school nurse.

Chislehurst was not the only educational institution to successfully block or delay the publication of a critical Ofsted report last year.

Durand Academy in Lambeth was granted an injunction preventing Ofsted from publishing a negative report in early 2017. The rating and report were both overturned by the High Court in August following a judicial review. At the time, solicitors warned the ruling would set a precedent.

And earlier this year, it was revealed that the publication of a similarly damning report into the training company Learndirect was also delayed by an injunction.

“I’ve never known Ofsted to publish two separate reports of the same school at the same time,” he told Schools Week. “I’m surprised too that it took Ofsted over six months before reinspecting the school if they had doubts about the first inspection.”

While both the reports are now available online, Chislehurst School for Girls did not inform pupils, parents or teachers of the results of the May inspection before Ofsted published the details online in January this year. The school said this was because the document was still a draft.

Ofsted said that while the May 2017 inspection of Chislehurst had raised concerns about “the quality of education in the school”, when inspectors returned to the school in December they “found improvements to have been made and the school was judged to be good overall”.

The spokesperson for Chislehurst School for Girls said it is “proud to be declared a ‘good’ school”.