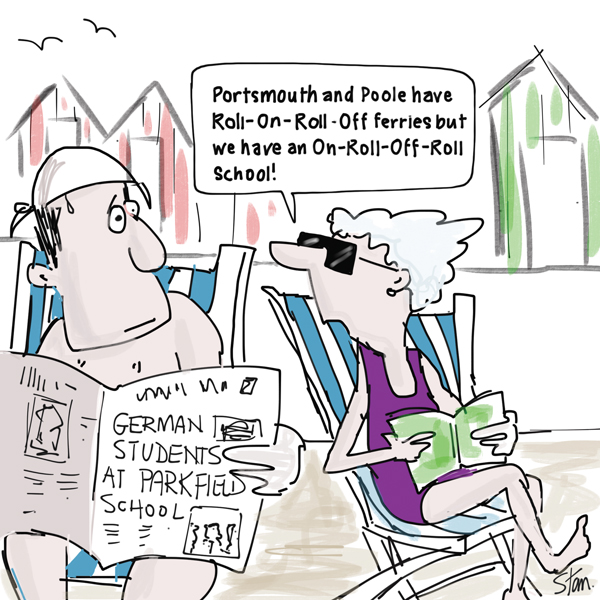 A free school in the south of England that filled spare places with German students for up to six months has denied recruiting pupils abroad to gain additional funding.

But Parkfield school in Bournemouth says that it will be “very happy” to repeat its offer of places to students on short placements in future.

The school included the German students in its autumn 2014 census, according to full governing body minutes seen by Schools Week. The government uses this October census to determine funding for the following academic year.

The minutes show that principal Terry Conaghan “was pleased that the temporary placement of the German students in year 10 had been a very successful project” and that the school planned to recruit “this type of student” again next year.

He explained that a drop in secondary numbers of the all-through school was “largely due to the German students who were only on the roll for a short time”.

Previous minutes, from July 2014, reveal that the school had a number of conversations with local companies about having “foreign students on roll at Parkfield for a set period of time”.

Secondary school vice-principal Matt Thurstan said: “If they are on the roll for a year then they are part of our census and would create some funding for the school.”

But school spokesperson Sam Hanson insists that although the language in the minutes might suggest a proactive drive to bring in foreign students to bolster funding, that was not the case.

“The school was approached, as were the majority of secondary schools in Bournemouth and many other schools throughout the country, to support projects for students from the EU to spend up to six months in this country,” she said.

“As EU citizens they are entitled to attend school here. They did not take the place of any local student as places were only offered where the school had capacity. At no point did Parkfield refuse any student.

“As with this year, Parkfield will not be actively recruiting EU students next year but, if approached and if we have the capacity, we will be very happy to consider them again.”

The governing body minutes show that in October 2014 there were 12 new starters in year 10, pushing pupil numbers up to 38 from the 26 in year 9 the year before.

Schools Week asked the school how many German students were included in the census, and if it had received funding from the Education Funding Agency for them, but the school had not responded as the paper went to press.

Micon Metcalfe (pictured), a school business director in south London who also trains education leaders, said: “Children from the European Economic Area have the same right to be educated as UK citizens. It follows that such children would be funded in the same way as UK citizens, that is, the funding is in arrears in the period following the child’s inclusion on the school census.

“If they are on the roll at the time of the census it will mean they (the school) have higher numbers and their funding will be for that. So from that sense it is not illegal. But if a school is actively seeking short-term students from Europe with the sole purpose of increasing numbers on roll at census time, then I would consider that to be unethical.”

An Ofsted report published last month said Parkfield required improvement. The school is temporarily located in a former office building ahead of a planned move to a controversial new site next to the runway at Bournemouth airport.