GCSE and A-level entries continued to rise this year, but subject-level data reveals big changes in some subjects.

Exams for the qualifications have been cancelled this year because of the pandemic. Teachers will instead determine grades and exam boards will quality assure their results.

Here we look at some of the key trends in Ofqual’s provisional entry data.

1. GCSE and A-level entries up…

Around 5.3 million entries to GCSE qualifications have been made this year, a rise of 0.4 per cent on 2020.

Ofqual said this was likely to be partly due to a 2 per cent increase in the number of 16 year olds in schools this year.

This is offset by a decrease in entries from younger and older candidates this year.

There was a slight increase in the entries in higher tiers. For example, in biology, 88 per cent of entries were in higher tier compared to 85 per cent last year.

2. … while AS entries keep falling

Entries for AS-levels have fallen dramatically again this year, reflecting the continuing impact of the move in 2015 to decouple AS-levels from A-levels.

Engineering entries also fell by 11 per cent, design and technology by 8 per cent and physical education by 5 per cent.

English language entries also dropped for the first time in at least five years, by 2 per cent.

At A-level, design and technology entries also dropped by 9 per cent, English literature by 6 per cent and media, film and TV studies by 3 per cent.

4. Big drop in ‘other’ modern languages

Languages in this category include Italian and Polish, but not French, German and Spanish, for which entries are reported separately.

There was a similar pattern at A-level, where German entries dropped eight per cent and other modern languages by 17 per cent.

French GCSE saw no change in entries, but increased 1 per cent at A-level.

Meanwhile, Spanish entries increased this year for at least the fifth year in a row. In 2017, 85,380 entries were made, compared to 109,655 this year. The increase this year is four per cent.

Likewise, there was a 3 per cent increase in Spanish A-level entries.

Entries to A-level geography rose by 16 per cent this year, with law and computing also seeing rises of 14 and 10 per cent respectively.

Psychology and sociology entries have also continued to rise with an increase of 8 per cent each.

Economics and business studies entries have both risen by 6 per cent, and religious studies 7 per cent. 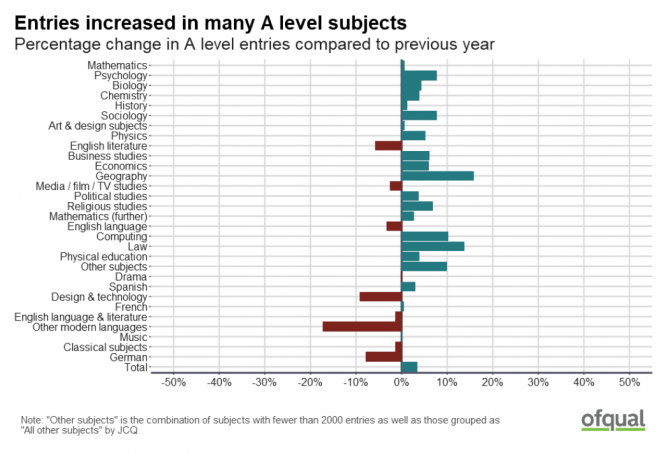 The three separate science GCSE subjects have all seen an increase in entries this year, with biology entries up 3 per cent, and chemistry and physics entries up 4 per cent.

Geography GCSE entries increased by 4 per cent, and English Literature by 2 per cent.

Food preparation and nutrition GCSE entries increased by 5 per cent and business studies by 4 per cent.

Entries to subjects that count towards the English Baccalaureate performance measure increased by 40,580 – 1 per cent – while entries for non-EBacc subjects decreased by 21,255 – 2 per cent less than in 2020.

This continues a trend in recent years, which has seen the proportion of EBacc entries increase from 76 per cent of all entries in 2017 to 82 per cent this year. 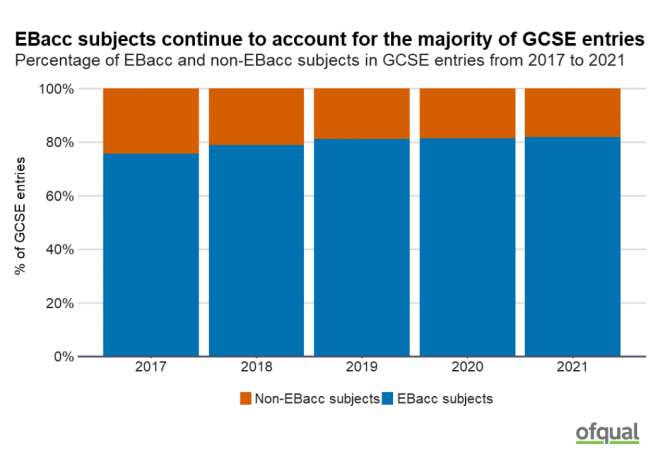