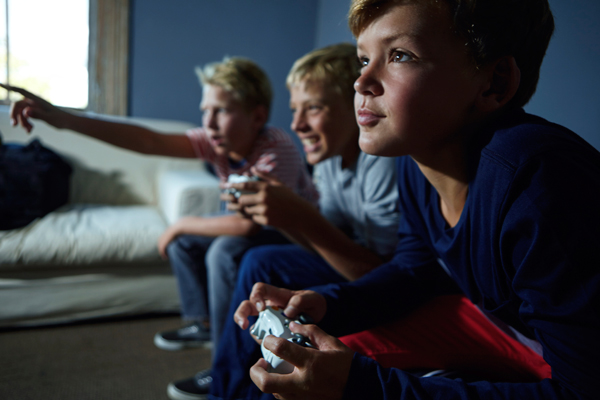 Brain imaging shows that concentration levels increase when students are faced with game-based learning conditions as opposed to conventional and multiple-choice questions.

The brain “wanders” less when an element of competition and “uncertain reward” is introduced.

“Technology has a reputation for doing bad stuff to children’s brains: this is evidence that the reverse can be true if we are careful about how we design and develop it,” says Paul Howard-Jones, professor of neuroscience and education at the University of Bristol.

He conducted the research with 24 Bristol students in the summer but will repeat the experiment with 10,000 secondary school pupils this year.

“For the first time we can actually see what learning through games does in
the brain.”

Participants in the “brain school” were taught in a brain scanner using three different conditions: a conventional exemplar question, a multiple-choice quiz and a computer-based game in which they competed with one another for increasing but uncertain rewards.

Professor Howard-Jones said that as students studied, activation increased in a network of the brain called the “default mode” – a mode associated with mind wandering and day dreaming.

“They were struggling to stay focused essentially,” he says.

But as the session became more game-based “you could see this mind wandering network decreasing in activity.

“We also found that students gained correspondingly higher scores when they were later tested.”

Professor Howard-Jones says that with careful design, the finding can help to revolutionise the way children learn.

“We have all seen how children’s noses are stuck to their gaming consoles. We think that we are beginning to identify what that magic glue is and are able to put it into games that teach the curriculum.”

The bigger classroom study, which will start in September, will be completed in partnership with Manchester Metropolitan University. The randomised controlled trial will allocate 69 schools to the three conditions, with each group applying a single approach throughout year 8.

Professor Howard-Jones says he hopes the study will help games to be taken “more seriously”.

The project is one of six in a £6 million research scheme launched by the Wellcome Trust and the Education Endowment Foundation, which aims to develop, evaluate and communicate the impact of education interventions grounded in neuroscience research.

Schools wanting to take part in the trial can go to www.sci-napse.net to find out more.