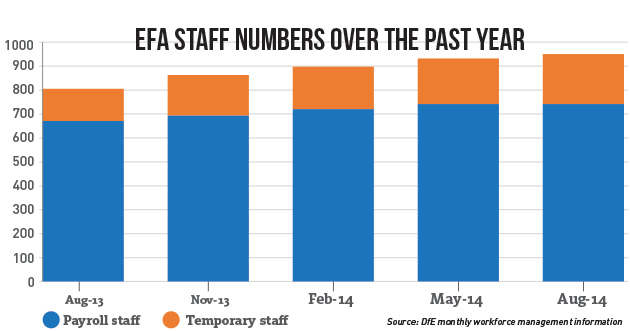 The Education Funding Agency (EFA) has significantly increased the size of its workforce in the past year, newly released figures show.

The news comes as the EFA scales up to handle a growing number of free school projects – and follows criticism that the current system for finding new school sites is “creaking”.

Figures for August 2014 show that the EFA now has a total workforce of 951 people – up from just over 800 a year before.

The number of both payroll staff and contractors has increased, with a total of 746 full-time equivalent staff on payroll and 205 temporary workers.

A year before, the EFA had a workforce of 806 – split between 671 on staff and 135 agency staff, interim managers and specialist contractors. This is an eighteen per cent increase on the prior year.

Analysis of government figures by Schools Week show that the EFA spent a total of £49.6m on staff costs in the year to August 2014, compared to £43.8m for the previous 12 month period.

The EFA is responsible for managing funding of all state schools, but in the past couple of years has seen its workload grow.

For the first time, the EFA was required to consolidate academy trust accounts into its own financial statements for the 2012-13 financial year – a significant job given the growth in academy numbers.

Additionally, the EFA has responsibility for finding sites for new free schools, where there has also been a rapid growth in numbers.

The EFA is understood to be actively seeking people for project director secondments into the free school capital delivery team currently.

Last week, writing for Schools Week, Natalie Evans, director of New Schools Network, called on the government to move responsibility for finding free school sites away from the EFA and toward regional property companies.

“A process that might have worked for a couple of dozen free schools is creaking at the seams now that there are regularly 100 approved free schools working their way through the system at any one time,” she wrote.

Asked about the EFA’s growth in staff numbers, a spokesperson said: “We are of course continuing to build our capacity and expertise as the free school programme grows. Seconding staff from other private and public sector bodies is only one of the ways in which we do that.”

Speaking at an education select committee in May, Department for Education (DfE) permanent secretary Chris Wormald said that the EFA had been relatively protected from cuts that other DfE group bodies had faced.

Writing in the EFA’s 2012-13 annual report, published in January 2014, EFA chief executive Peter Lauener acknowledged that the agency had had difficulties filling vacancies.

Mr Lauener wrote: “We made less progress with vacancy filling than we would have liked. In the summer immediately after setting up the EFA, we had 150 vacancies and this only fell to 120 vacancies by March 2013 (a fall in the vacancy rate from 19 per cent to 16 per cent).

“We have taken steps to improve our ability to fill vacancies, including limited external recruitment for priority vacancies.”