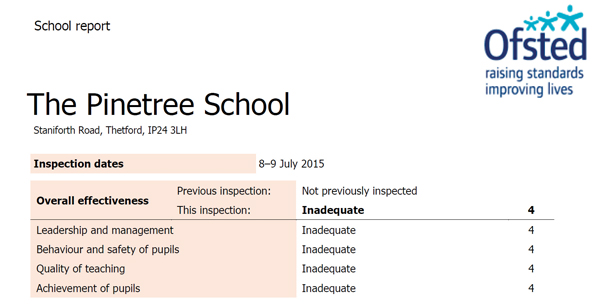 A free school supported by former education minister Liz Truss has been rated inadequate after being criticised for locking pupils in classrooms to “manage behaviour”.

The alternative provision free school was championed by Ms Truss, the local MP, who said at the school’s opening in 2013: “You have blazed a trail that others will want to follow. They can look at Thetford and see what can be achieved.”

But in a report published last week Ofsted gave the school – formerly known as the Thetford Alternative Provision Free School – a grade four rating in all categories.

Inspectors, who visited in July, said the school needed to improve the safeguarding of all students.

They recommended that “the use of locked doors as a behaviour management tool” be reviewed and that staff should develop students’ ability to manage their own behaviour.

The report read: “Students are not able to move around the school independently, because doors have an automatic locking system that requires a card or a key to secure access.

“Students find this frustrating as they are not able to get to the toilet or, on occasion, to the lessons they are due to attend. At times, fire exits are kept locked and fire extinguishers are not present in many classrooms.”

The school, which has 31 students, was taken over by The Engage Trust in April, which Ofsted praised for “acting quickly to raise standards”.

Des Reynolds, chief executive of the trust, said he had tried quickly to “ensure the issues inherited from the previous leaders have been addressed and both buildings and staff practice have been dramatically improved”.

Bolts had also been put on damaged fire doors because there was no other way to keep them closed.

The trust identified both as issues when it took over and repair works were booked in, Mr Reynolds said. The work was now completed.

“The school is also reviewing the behaviour policy further to include specific reference to deprivation of liberty safeguards. All staff are receiving additional training in this issue.”

He said inspectors found one administrative error in recording safeguarding recruitment checks, which was amended before the end of the inspection.

“Parents and members of our local community will be understandably concerned to read this report and we would like to reassure people that The Pinetree School continues to be a safe and effective community for our learners.”

The trust was aiming for an Ofsted “good” within 18 months. Mr Reynolds said he was confident a “strong staff team and expertise from the trust will continue to drive swift and rapid improvements”.

The school was said to be subject to regular Department for Education (DfE) monitoring in its first two years. Results raised “serious concerns” that prompted the regional schools commissioner to step in to help to find a new sponsor.

A special school in Nottingham removed locks on internal doors after it was criticised during an Ofsted inspection in 2013.

Woodlands School was rated as inadequate after some classroom doors were “locked inappropriately” to stop children running out of classes.