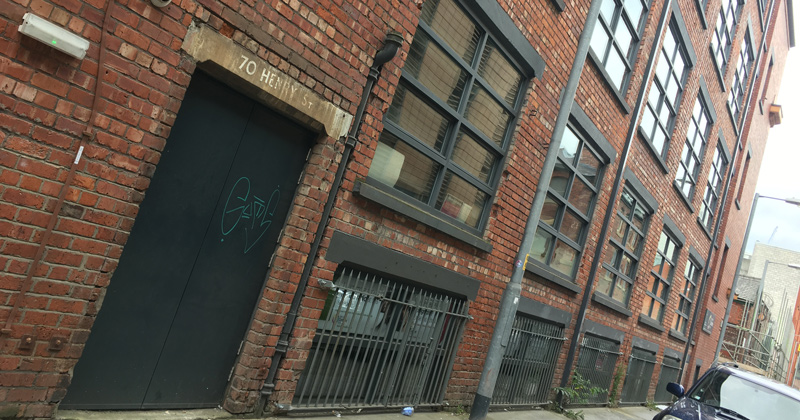 An MP is to call in the Serious Fraud Office after a collapsed free school leader used a “false VAT number” when billing a council for consultancy services.

Alun Morgan was the sole listed director of Morgan Bristol Limited, which was registered to the steel fire escape door on the side of Manchester Creative Studio School, where Morgan was chair of directors. The door’s address is painted above it in what looks like white paint.

Morgan’s company was paid more than £220,000 by Oldham Council for procurement and ICT services over two years. But the firm has never filed accounts and has since been struck off by Companies House.

Oldham Council said this week the use of the false VAT number was “reported to HMRC, who suffered the financial loss”. Morgan Bristol was paid almost £30,000 in VAT, which was to be paid to HMRC.

Schools Week understands these allegations were passed to the Department for Education, but did not feature in its own investigation into the school, which was published in May last year.

Greater Manchester MPs Jim McMahon and Lucy Powell have now called for a “full independent investigation”, with the former preparing to submit evidence to the Serious Fraud Office.

McMahon said the revelations about Morgan Bristol were “one of many serious allegations” relating to the leadership of the school.

“With so many outstanding allegations, only a full investigation will bring this four-year saga to a close and hold those responsible to account.”

Manchester Creative Studio and Collective Spirit Free School were closed in 2018 and 2017, respectively. Rolls were falling and both had large deficits, while damning Ofsted reports warned of widespread failings in education, safeguarding and provision.

A government investigation, published in May, concluded that Morgan breached the Companies Act over payments of more than £500,000 from the schools to the Collective Spirit Community Trust, a company in which Morgan was a 50 per cent shareholder and which also had “unclear” links to the schools’ former chief executive, Raja Miah.

However, a Schools Week investigation in November revealed the two schools actually paid more than £2 million to multiple companies linked to Miah. Morgan also had ties to some of these companies.

The DfE probe warned that investigators encountered “substantial difficulties” establishing “any reasonable audit trail of financial transactions or evidence to assure the regularity of funds spent by the trusts”.

Powell added that the DfE “completely failed their due diligence responsibilities to ensure the suitability of these individuals to run schools”.

The DfE and its agencies are clearly incapable of adequately investigating

“Their lack of accountability and rigour has failed pupils, their parents and the tax-payer and brings our schools system into disrepute”.

The DfE said it had nothing to add on the conclusions of its investigation report, and any further action regarding Morgan Bristol would be taken by HMRC if it saw fit.

But Kevin Courtney, joint general secretary of the National Education Union, warned there have been “too many examples of misuse of public money by academy and free school directors which the DfE and its agencies are clearly incapable of preventing or even adequately ‘investigating’”.

Morgan was employed directly by Oldham Council from April 1, 2017, as interim head of strategic relationship management and then promoted to assistant commercial director in June. Later that month the council received an anonymous whistleblower allegation about financial mismanagement at the Manchester schools, prompting its own investigation into Morgan. He was suspended on August 3, and resigned the next day.

Oldham council said it has now introduced “stricter processes” around the checking of VAT numbers, and will “take action” against any employees who do not follow contract procedure rules.

In July, academies minister Lord Agnew said the DfE had written to all three men “strongly discouraging their future involvement within schools” and warned regional schools commissioners to inform him if they heard of any.

An employment tribunal ruling for another Oldham Council employee reveals further concerns over the payments – including that they breached European procurement rules.

A tribunal upheld the council’s decision to dismiss procurement officer Nicola Wadley, who worked with Morgan and lost her job in the fall-out from the investigation. The result was published in November.

The tribunal revealed a council investigation found Wadley had “failed to ensure” the provision of Morgan’s services “did not breach the financial thresholds of European procurement rules” and that there had not been “sufficient contracts in place”.

The investigation also found Wadley had “inappropriately approved” two purchase orders to enable payments to Morgan Bristol of around £25,000.

Wadley, the interim head of sourcing services, claimed she had been dismissed unfairly and was “blamed for the conduct of Morgan’. However, the tribunal ruled she was ‘personally culpable’ in not challenging Morgan, to whom she answered.