The Department for Education has published the annual accounts for spending in the academy sector.

It reveals that the financial health of the sector is improving, the march to academisation is slowing and that the cost of fraud has ballooned.

Here’s your trusty Schools Week round-up of everything you need to know.

1. Nearly 1 in 10 trusts in some regions are in deficit

The financial health of the sector is improving: the overall aggregate cumulative deficit for 2018-19 was £64 million and the aggregate surplus was £2.8 billion (both improvements on the £78 million deficit and £2.5 billion surplus in 2017-18).

A quarter of trusts in in the red posted deficits of over £500,000 last year, and two-thirds were single-academy trusts.

At the other end, nearly 7 per cent of trusts (189) posted surpluses of more than £3 million.

However there are big regional differences: nearly one in ten trusts in both the west Midlands and Lancashire and west Yorkshire were in deficit.

One thing worth flagging though: the overall pension deficits across academy trusts has ballooned to £11.1 billion, up from £6.6 billion in 2017-18. This is solely down to changes in actuarial assumptions, which trusts can’t do much about.

2. The march to academisation has slowed

While the number of academies from July 2018 to July last year grew by ten per cent, the pace is slowing.

As of July last year, 82 per cent of academies were in trusts with more than one academy. The mean number of academies in MATs was six. 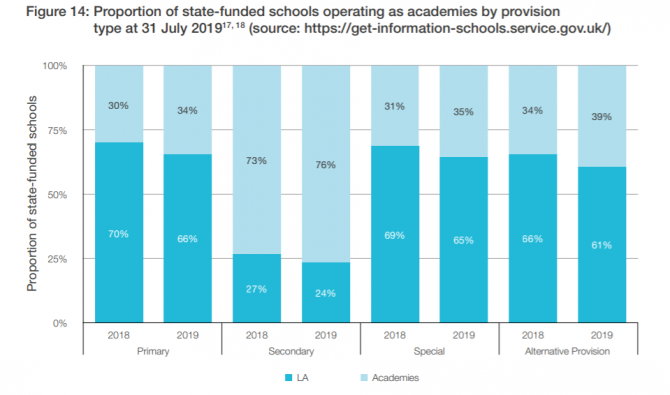 Of the academy frauds, a total of £3.9 million has been recovered, compared to just £703,101 in 2017-18. (The recovery figures include ongoing cases from previous years.)

The ESFA also received 46 allegations relating to fraud or financial irregularity in academies last year, compared to 31 in 2017-18.

This led to 16 ESFA visits last year, six were fact-finding, six were financial management and governance reviews, and four were investigations.

A government crackdown on related-party transactions meant from April last year trusts have had to declare intentions to pay firms connected to trustees. Trusts must also get approval from department officials before agreeing any such contracts over £20,000.

5. RSCs have been busy sending out warnings

Regional school commissioners have a range of powers to address poor performance, and they used them much more last year.

6. Banning of booze pushes up rule-breaking

The government said this was down to 26 instances where auditors flagged trusts spending cash on alcohol (outlawing all spend on booze was a relatively new requirement at the time). The report stated that the “majority of cases” related to trusts buying alcohol for school events, such as awards evenings, where it was to be resold.

The remaining trusts mostly broke rules over following procurement processes or entering related-party transactions at cost – which is similar to previous years.

7. We don’t know if the number of £100k-plus salaries have risen

We don’t know how many more academy staff are paying salaries of over £100,000 as the department has changed how it records this.

However the rise is down to the government including employer pension contributions in the 2017-18 figures – meaning (perhaps handily) they are not comparable.

But, it means that 43 trustees are paid over £200,000. Previous investigations by Schools Week has revealed the pay of leaders at the largest trusts seems to be on the rise.

You can view a full list of the academy trusts paying staff over £150,000 here.

The number of exit packages over £100,000 was six – up from just one the previous year. Of those, three were compulsory redundancies and three listed as “other departures agreed”. 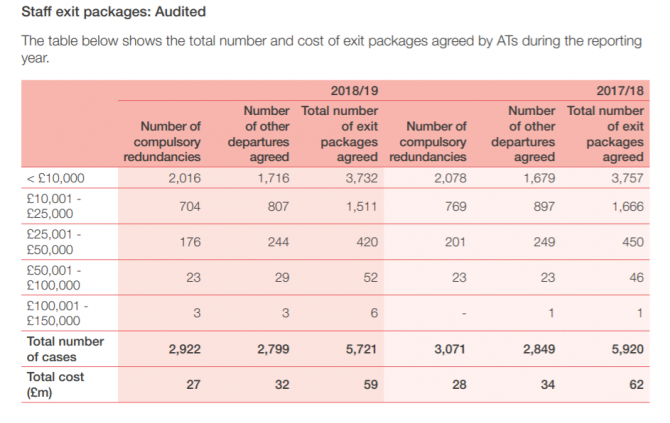