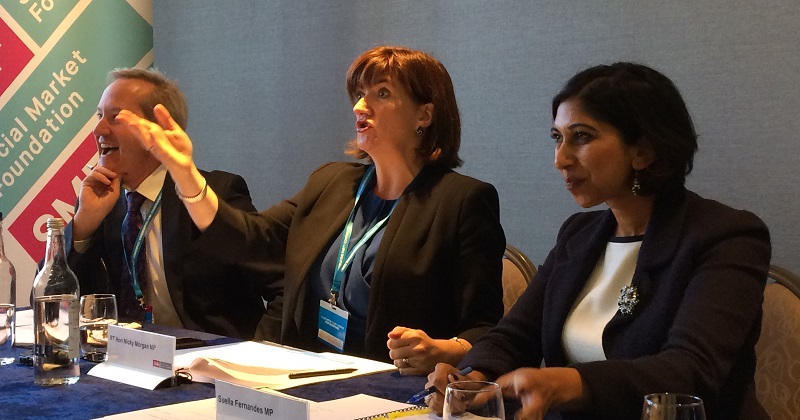 Nicky Morgan gave Conservative Party Conference delegates a rare insight into her time as education secretary when she addressed a fringe event on educational inequality this morning. Here’s what we learned…

Nicky Morgan said the key announcement was set to feature in her successor’s speech tomorrow, and although the proposal was trailed in the Sunday Times last week, this morning was the first many of the delegates heard of it.

Morgan said she wanted to “put on record my support for Justine Greening’s announcement”, and said the proposal was similar to the ‘achieving excellence areas’ proposed in the white paper, which were due to focus on ‘areas of entrenched educational underperformance’.

The original policy was due to identify areas which needed extra targeted support, and focus on improving the supply of teachers, leaders and governors. However uncertainty surrounds the plans, which have seemingly been delayed.

The government is keeping tabs on the former education secretary

Morgan got some laughs when she declared towards the start of the session that she had “two whips in the room”, as well as a large number of journalists.

It is likely that the whips – who work for the government to ensure its MPs follow the party line – were at the fringe for the same reason we were: to hear Morgan’s comments on grammar schools.

Morgan told the fringe she had allowed the Weald of Kent grammar school to proceed with its controversial expansion to a ‘satelite’ site several miles away because of a manifesto pledge.

In its 2015 manifesto, the Conservative Party pledged to allow all good schools to expand, including grammar schools, so Morgan is essentially arguing that it was the will of the British public.

But she is less inclined to support the proposals in the green paper, and repeated the concerns she has already aired.

“I do worry that a return to more selection risks undermining the progress that we have seen over the course of the last decades in our schools,” she said.

She warned that it could disrupt reforms by “throwing something else into the education debate rather than focusing on every school offering an excellent education”, and said a return to selection was “not the right move at this time”

UTCs should admit pupils at age 11

The University Technical Colleges programme grew substantially during Morgan’s tenure, albeit with mixed results, and the concerns about their limited success appears to have made an impression on the former minister.

Several UTCs have already closed after failing to recruit enough pupils to be financially sustainable, and fears have been raised about them being used as a way of academically selecting pupils at 14.

Dr Becky Allen, from Education DataLab, had previously told the panel she was not in favour of what she called “selection at 14” because she believed that every child was capable of completing, and deserved to complete a general academic education, and added that she was concerned about which pupils were being “funneled in” to UTCs.

Morgan said she was now in favour of UTCs being allowed to recruit pupils earlier.

“I would, in order to avoid this change at 14, I would like to see them admitting pupils from the age of 11, because I think that would mean they would have a stronger, more sustainable pipeline of students,” she said.