The medical advice received by Gavin Williamson before he used emergency Covid powers to order a London council to keep its schools open has been branded “astonishing” for its lack of evidence.

The education secretary issued a “temporary continuation order” on December 14, ordering the London borough of Greenwich to rescind its request for schools to move to remote learning for the final week of the autumn term.

It was the first use of the emergency powers under the Coronavirus Act 2020. However, the Act says that before using the sweeping powers, Williamson must “have regard to any advice” from government medical officers “relating to the incidence or transmission” of Covid.

The advice, released by the Department for Education after a Freedom of Information request by Schools Week, fails to note the transmission rates in the borough.

It also said closures would impact school testing, which was not rolled out until the following month. Just two of Greenwich’s schools were involved in a pilot testing programme of more than 70 schools. 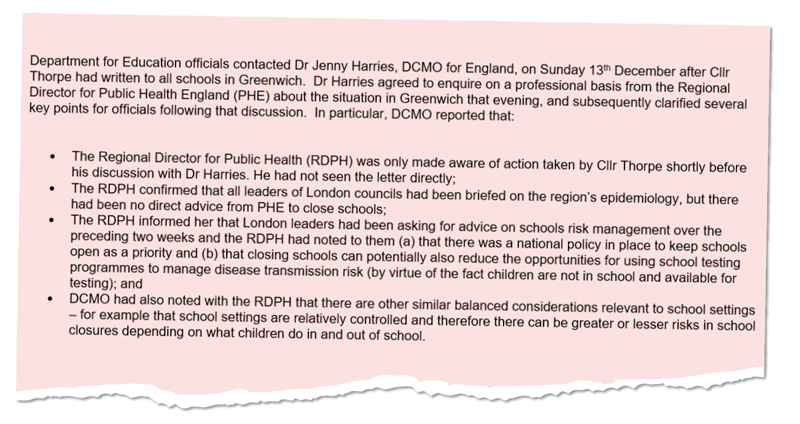 Dan Thorpe, the leader of the Labour-led Greenwich council, told Schools Week the advice was “astonishing” and “didn’t stand up to any scrutiny whatsoever”.

Dr Mary Bousted, joint general secretary of the National Education Union, added: “It is disturbing if emergency legislation is being used on such flimsy evidence and that leads me to conclude that this was a political imperative rather than what it should have been, a considered response to a local authority.”

Covid numbers were doubling every four days, with infections particularly hitting youngsters: 4,262 pupils and 362 staff were self-isolating at the time.

She reported Fenton confirmed all leaders of London councils had been briefed on the capital’s epidemiology, “but there had been no direct advice from PHE to close schools”. PHE said it is for the DfE to make decisions on school policy.

The Department of Health and Social Care (DHSC) said this was a routine briefing that provided a broad overview of epidemiology in the city.

But an email sent to London leaders prior to the meeting, seen by Schools Week, bills it as an “urgent Covid -19 briefing on the current position”.

Thorpe told Schools Week there was a “very clear message” from PHE that London was “seeing exponential growth of the virus that demands immediate action”.

“If that’s not a moment to move, I’d struggle to know what is … you only get called into a meeting on a Sunday if there’s trouble.”

Harries also informed the DfE that Fenton told her that London leaders had been asking for advice on schools risk management for two weeks, but had been told it was a national policy to keep schools open. Closing could reduce the opportunities for school testing programmes, the advice added.

Following the guidance provided, the FOI states Williamson concluded the decision taken by Thorpe “was not supported by public health or scientific advice”.

Thorpe said the minister’s decision “doesn’t seem to be based on any clear evidence or rationale” and questioned why no numerical values or transmission rates were included in the advice.

Karam Bales, an member of the NEU national executive, said: “There isn’t any evidence, we just have a narrative referencing evidence we can’t see.”

In response to Schools Week, the DHSC said at the time the advice was issued, rates of transmission in Greenwich were lower than in other areas where schools remained open.

The FOI response notes that Harries, after contacting Fenton, “subsequently clarified several key points” for departmental officials. It then states that “in particular”, that advice included the four points (pictured above) – suggesting there might be more advice that has not been revealed.

The DHSC did not respond when asked to clarify if this was a full summary of the advice Harries offered.

The DfE, in is FOI response, again acknowledged it knew about the highly infectious new Covid variant before the order. But it said the “limited and early information about the new variant was not such to have an impact on the decision”.