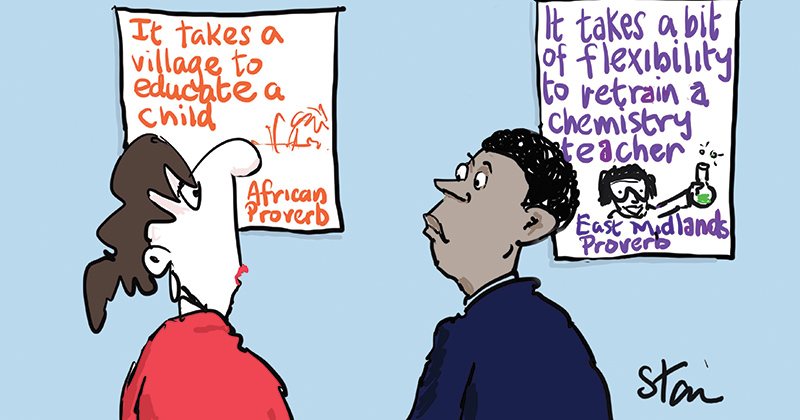 One of the largest lead schools in the government’s “returner teachers” pilot says demands for flexible working scuppered the scheme – leaving it with just three of the 23 teachers it retrained.

In last year’s Return to Teaching pilot schools were given £1,900 to retrain and employ qualified teachers no longer working in state schools.

Schools Week recently revealed that the scheme had mixed results, with only three of the 53 lead schools training 20 or more returners, despite funding available for up to 40 teachers in each school.

Bromley Schools’ Collegiate, which provides teacher training across 31 schools in Kent, was only able to offer jobs to three of the 23 returners it trained. A fourth teacher found a job elsewhere.

Derek Boyle, teacher training co-ordinator at the collegiate, said the volume of flexible working requests was a “major barrier” to offering more jobs.

“It was a little frustrating as we knew schools with vacancies. It wasn’t a quality issue, it was more they [teachers] shot themselves in the foot slightly because of requirements on work patterns.”

Other lead schools also said they struggled to offer part-time work to participants.

The disclosure supports previous analysis by Schools Week that found a growing group of “tired teachers” looking for a cut in working hours, rather than a lack of qualified teachers in the system.

It wasn’t a quality issue, it was more they [teachers] shot themselves in the foot slightly because of requirements on work patterns

A report by the think tank Policy Exchange, published last year, urged schools to offer flexible working such as “keep in touch days”, and cash retainers to help to tackle the teacher supply crisis.

However Boyle said that a job share – two people who split one full-time position – worked best for schools.

Bromley, with Coombe girls’ school in south-west London, another lead in the pilot, also found that many of the returners who qualified overseas ended up taking teaching assistant or voluntary roles.

Nicholas Power, senior assistant headteacher at Coombe, said eight of the 14 participants it trained were working in schools, although not all in permanent roles.

In the pilot, schools received £1,520 from the National College for Training and Leadership to train a returning teacher in an EBacc subject, and a further £380 if they employed them.

However a second version of the pilot announced in November will now target only maths, physics and modern foreign languages teachers with incentives for schools to enable flexible working patterns.

This pilot, which launches in February for the north west and south east only, requires schools to demonstrate that they can offer the returner a job at the end of the programme. If no positions are available, the school cannot take part.

As a result, Andrew Roach, director of the teaching school at George Abbot school in Surrey said his school would not be involved. “Essentially what you’re doing is an interview process, and at this point in the academic year, when unsure of staffing needs, we cannot commit to that.”

A DfE spokesperson said it was investing more than £1.3 billion over this parliament to attract the “brightest and best” into teaching.

“We are currently working with stakeholders to develop advice for schools on recruiting returners and offering part-time teaching responsibilities, and will set out more information in due course.”