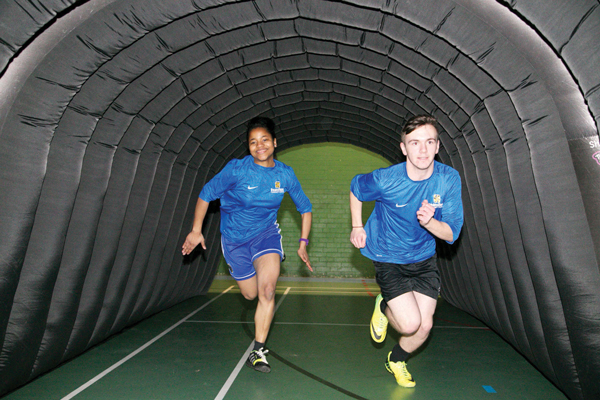 A virtual Usain Bolt was put through his paces by students from a Wolverhampton school as part of an interactive PE workshop.

Science education specialists Classroom Medics gave some 150 year 7 and 11 pupils from Deansfield Community School a taste of the training regimes of top athletes to show how their body works and its capabilities.

Both groups took on “The Accelerator” sprint simulator that let them race a
virtual Usain Bolt. They could see how far behind they’d be in a real race, plus record their peak sprinting speed.

The simulator, which is in an inflatable, domed tunnel, is made up of a 10-20m strip of LED lights that flash in sequence at the Olympic and world sprint champion’s running speed. Pupils simply race after the lights.

James Hearn, head of PE at Deansfield, said: “The Accelerator was a particular highlight, giving the opportunity for students to race against the legend that is Usain Bolt, and his actual split times, in a cool tunnel. It enables them to see for themselves just how good elite athletes are.”

Pic: Kiesha Kilomwene and Brandon Whetton, both aged 16, race against a virtual Usain Bolt in The Accelerator sprint simulator