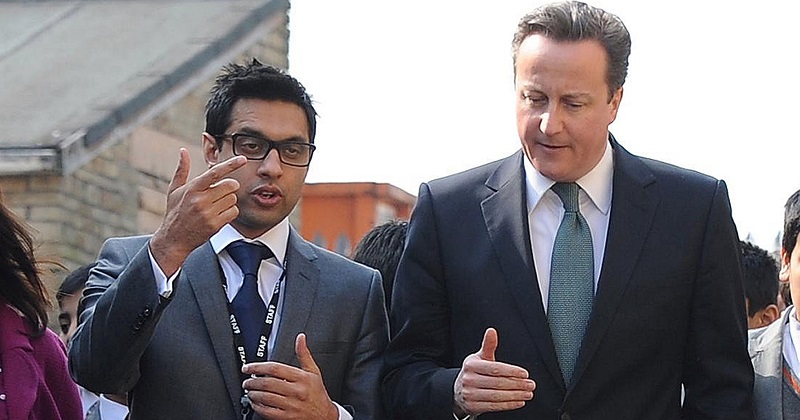 The principal of a flagship free school has been jailed for five years for his part in defrauding the government out of £69,000.

Sajid Husain Raza, his sister Shabana Hussain, also a teacher at the school, and the school’s former financial director, Daud Khan, were previously convicted by jury of a total of ten charges – including fraud, false accounting and acquiring criminal property.

Now Raza has been jailed for five years, Hussain jailed for six months and Khan for 14 months

Kings Science Academy in Bradford, West Yorks., was a free school set up in 2010 by Raza, 43, and primarily run by him.

During the trial the court heard that public money from grants given to the defendants by the Department of Education to set up the school and run it were treated “as their own” for over three years.

Seven of the counts related to the school, while the other three, two of theft and one of fraud related to mortgage applications made by Raza, prior to setting up the academy.

Raza, had been convicted of four counts of fraud, three counts of false accounting and two counts of obtaining money transfer by deception.

While, Khan, 45, was convicted of two counts of fraud and three counts of false accounting.

All three defendants are from Bradford.

Speaking during trial this summer, Simon Kealey, prosecuting, told the jury: “In summary, the prosecution allege these defendants treated public money as their own, paying themselves what they wanted whether they were entitled to it or not.

“And when challenged to provide proof of expenditure created or fabricated documents in order to cover their tracks.

“During the course of setup and running the school the prosecution alleged the defendants committed fraud, dishonestly diverted money intended for the school and created a series of false documents to cover their tracks.

“The courts span period of time of just over three years from November 20101 to December 2013.”

The judge concluded that while they were entitled to payment for some of the work carried out, Raza and Khan had defrauded the public money out of £69,000 and Hussaian £13,000.

Sentencing them today (FRI) at Leeds Crown Court, West Yorks., Judge Christopher Batty said: “The three of you were convicted by the jury of a number of counts relating to your dishonest dealing with public money during the period when you were setting up the Kings Science Academy.”

Explaining that free schools were part of the 2010 Conservative party manifesto, they were to be run by teachers, parents, religions or charities.

“They were set up to educate children, they were not set up to be a vehicle for making money by those who ran them.”

Speaking about Raza, Judge Batty described him as the driving force behind the application for the new school, though he was satisfied reasons for setting up the new school were legitimate.

He told the court he had heard that Raza, who he described as “arrogant and autocratic”, had been earmarked for a leadership role and was an experienced teacher.

“While you were, in fact, someone with no leadership experience and fairly little teaching experience, you didn’t have the depth of experience to build and run your own school,” he added.

The court heard Raza was in debt before starting the school as rental properties he had were making a loss.

Judge Batty told Raza making money was important for him, both for the school and “the debt around his neck”.

He said: “You were out of your depth, you sought to use public money to enrich yourself.”

“In the end it was this exposure to debt that probably drove your offending in relation to the Kings Science Academy fraud,” the judge later added.

Speaking to Hussain, Judge Batty said she had been submitting invoices for work she hadn’t done.

He said that the total hours she put in for May had amounted to 82 days of work.

Speaking about Khan, Judge Batty said: “You played a vital role in defrauding the money for providing an education to the children of this country.

“You could have walked away but you stayed for the best part of 19 months.”

Previously, the court heard Raza had been working as a qualified teacher prior to setting up the Kings Science Academy.

A Business Case Grant came with strict guidelines as to how it should be spent, including admin costs, room rental and travel expenses, but no provision for salary, the prosecutor said.

Raza overpaid himself from a Lead In grant, which was to provide salaries for the teaching staff, the jury heard.

The court heard that in another count of false accounting, invoices had been falsely created and submitted for several teachers’ salaries.

Mr Kealey also told the court that Raza’s Co Op bank account peaked in July 2011 with £28,000 “made up of three large credits from the Kings Science Academy and about half the balance was used in the same manner to make large mortgage re-payments”.

The court heard Raza’s Co Op bank account peaked in July 2011 with an amount “made up of three large credits from the Kings Science Academy and about half the balance was used in the same manner to make large mortgage re-payments”.

These financial discrepancies were brought to light, all three were interviewed separately by police and later charged.

Benjamin Hargreaves, defending Raza, said: “He will be never be allowed to work in a school again and he has lost all that he holds dear to him.”

He added: “The school should have probably never have been given permission to open.

“Whether it was the fact he presented such political opportunity for those who were pushing the free school system, they were not going let it fail.”

“If this was a properly regulated venture it would not have been deemed fit. He and the board failed to demonstrate proper fitness.”

Mr Hargreaves said: “Primarily I have to conclude he will be sentenced on his pernicious acts to get money to service his debts.”

James Bourne-Arton, for Hussain, said: “She was a very capable and outstanding teacher, a career which is now finished for her, as are a number of other jobs she would have liked to consider.”

Nicholas Worsley, defending Khan, said: “As far as he is concerned he is someone who has been of course complicit but exploited in the end.”