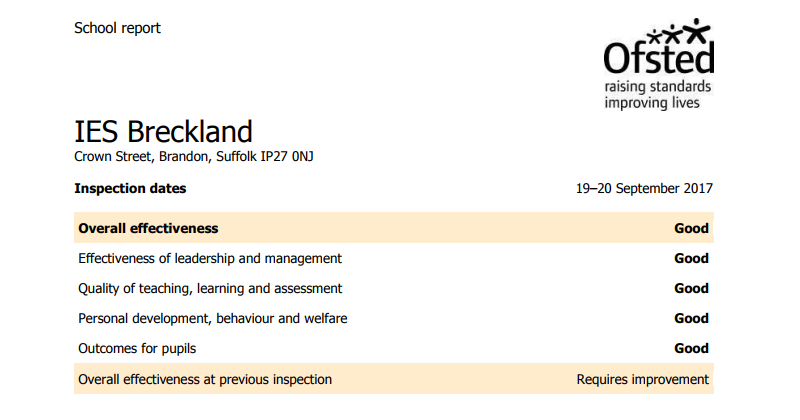 Ofsted has praised “inspirational leadership” at the first free school in England to be run by a for-profit company, rating it ‘good’ for the first time since it opened.

IES Breckland in Suffolk was praised for its improving teaching quality and pupil progress .

Inspectors complimented the “ambition” of and teamwork between the Sabres Education Trust, the school’s non-profit sponsor, and IES International English Schools UK, the private company that runs the school.

This is the latest evidence of performance improvement at the controversial school, which had a tumultuous existence in the first few years after it opened in 2012 .

It was placed in special measures in January 2014, with inspectors criticising ‘inadequate’ teaching and behaviour, poor pupil progress and low attainment.

At the time, it was the only free school to be rated ‘inadequate’ which managed to avoid closure or rebrokering to another sponsor.

Then, in August 2015, the school just about met the government’s floor standard for GCSEs in its first ever set of results.

That year, IES Breckland saw 40 per cent of its pupils achieve five or more A* to C grades, including English and Maths.

In November 2015, the school was removed from special measures, but was still rated ‘requires improvement’.

It wasn’t until the inspection this September that it received its first positive Ofsted grade.

The company behind the school has also been dogged by financial problems. According to its accounts, IES International English Schools UK Limited made a loss of £67,574 in 2013.

It finally entered the black for the first time in 2014, posting a profit of £36,000, but only after it received a £307,000 bailout from its Swedish parent company, IES Sverige AB.

However, a spokesperson for the company said financial support from IES Sverige meant it remained in a good financial position, despite the reported losses.

“IES has not taken money out of our UK operations, quite the opposite,” he said. “We are concentrating on supporting IES Breckland to deliver the highest possible quality of education for students in Brandon and the surrounding area.

“Our operations in the UK have been financially supported by the mother company in Sweden, which is in a very strong financial position, and this is in order to meet the goal of providing the level of educational quality described above.”