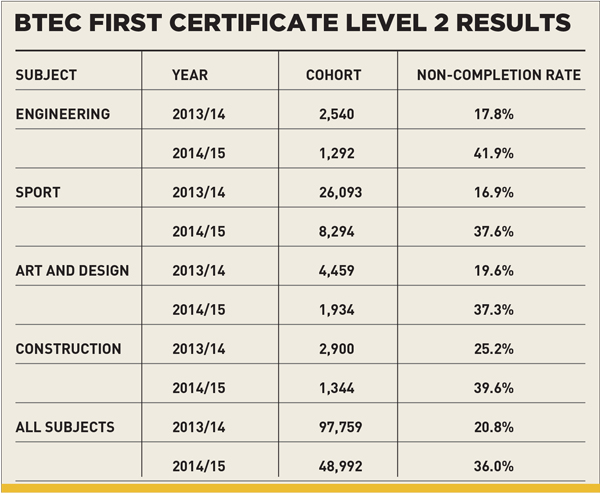 The proportion of BTEC First level 2 certificate students not completing their courses has jumped by 73 per cent in a year, new figures released by Pearson have revealed.

The latest results for the qualifications show the proportion of non-completions on BTEC First level 2 certificate courses rose from 20.8 per cent in 2013/14 to 36 per cent in 2014/15.

In some subjects, the percentage of pupils who did not complete their studies more than doubled.

The percentage of non-completions in engineering rose from 17.8 to 41.9 in the same period, while the proportion in sport rose from 16.9 per cent to 37.6 per cent.

In response to queries from Schools Week about the statistics, exam board Pearson has said it was “difficult to speculate” on the reasons behind shifts in the non-completion data.

A spokesperson said in order to produce a set of results in a registration/certification model rather than an entry, series based qualification or single test model, it had to make “some assumptions” about expected completions.

She added: “We know that in some sectors and some institutions they will have students who take two years to complete a course, where we have estimated one year completion, especially if there is a dominance of older learners in a sector, who may be completing a course alongside a job.

“Secondly, it’s important to note the number of students when comparing the percentage – as in some sectors the percentage is high but there are only a few learners in that sector.”

But non-completions fell for level 1 and 2 First awards, certificates, extended certificates and diplomas, and for most level 3 National qualifications.