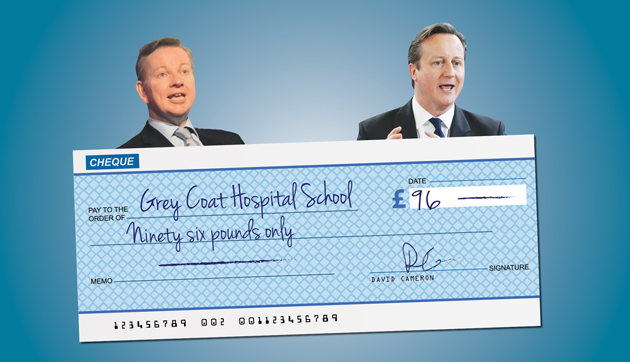 The state secondary school selected by David Cameron and Michael Gove for their daughters appears to have breached school admission laws by asking parents for money when offering them a place, Schools Week can reveal.

In the past week, it has emerged that the prime minister’s daughter would be attending The Grey Coat Hospital in September, the Westminster school where the former education secretary’s daughter is already a pupil.

Parents at the Church of England school – which is less than a mile from Downing Street – have claimed they were asked for a payment of £96 when joining Year 7 of the school, the entry route intended for the Camerons and taken by the Goves.

A letter sent out to confirm offers of places in the school sixth form also sought a £120 cheque for school funds. On that letter, which Schools Week has seen, there is no opt-out. It simply notes that the parent should enclose a cheque.

Both politicians refused to respond when asked by Schools Week whether they had paid the school.

Requesting money from prospective parents breaches the national admissions code, which states that schools cannot request financial contributions as any part of the admissions process. That includes voluntary contributions, donations or refundable deposits.

Another London secondary school – Camden School for Girls – was censured by the admissions watchdog for simply including a letter about donations with their acceptance forms.

The disclosure will strengthen calls for an overhaul of school admission policies. Last month, former superhead Dame Sally Coates called for a national review amid concerns of underhand selection tactics.

Officials are swamped with complaints, mostly from parents, about schools breaking the code. Last year the Office of the Schools Adjudicator dealt with 274 cases, up from 162 in the previous year. This is on top of local admissions appeals processes.

Fiona Millar, from Comprehensive Future, which campaigns for fairer schools admissions policies, said: “Successive governments have completely fudged looking at the huge range of problems that now exist [in the schools admission system].

“We want to see a complete review after the election. Labour was promising that, but we haven’t heard much from them.”

Grey Coat is one of the capital’s most sought after state schools and gets more than six applicants for every place. Pupils at the school can study ancient Greek, Mandarin and Jap But the school could now face an Office of the Schools Adjudicator investigation.

A letter sent to prospective sixth-form parents this month asks them to choose whether to accept or refuse a place.

The letter also includes the line “I enclose a cheque for £120 for School Fund” above where the student and parent are asked to sign and return the form.

No further information about the fund is given on that sheet.

A separate letter, sent in the same envelope, read: “If you confirm your offer of a place … then we ask you to pay School Fund, which for sixth form is set at £120 per annum.”

It continues: “Paying School Fund is an important way of showing us that you are serious about taking up a place with us in Year 12 in September.”

But clause 1.9n of the Schools Admission Code states admission authorities “must not request financial contributions (either in the form of voluntary contributions, donations or deposits, even if refundable) as any part of the admissions process.”

Grey Coat refused to comment when approached by Schools Week, despite repeated phone calls and a reporter visiting the school.

A prospectus published by the school says parents are under “no obligation” to contribute. In a submission to the OSA when challenged on its similar admissions letter, Camden School for Girls said many parents did not return the deposit and it had no bearing on them being offered a place.

But schools adjudicator Ann Talboys said the requested deposit gave the impression of being required and so breached the rules.

Grey Coat has been reprimanded previously over its admissions: in November 2013, it was judged to use an “unfair” points system to score prospective parents and pupils on their church activities.

The situation is particularly embarrassing for Mr Gove, who was the secretary of state responsible for simplification of the admissions code. In 2011 he said the code was “bureaucratic and unfair”, adding: “You shouldn’t have to hire a lawyer to navigate the school system.”

As Grey Coat is an academy, he was also the signatory on a government contract with the school stipulating that it must abide by the code.

The British Humanist Association (BHA) is a member of the Fair Admissions Campaign, which is pushing to end religious selection state-funded schools.

Pavan Dhaliwal, BHA director or public affairs, said these schools often have “extremely complex” policies. Adding: “It is less common for schools to be asking for cheques in this way, although this is not the first time we have seen this either.

“Much more needs to be done to ensure that religious schools comply with the School Admissions Code, and the Code itself needs tightening up in order to reduce
religious selection.” A review into school admissions from Research and Information on State Education (RISE) last week also highlighted the importance of strong regulation.

Chief school adjudicator Elizabeth Passmore, speaking at the launch raised concerns about how the ‘fair banding’ system is used in schools.

An investigation by Schools Week last week showed how a school in Northamptonshire used a ‘fair banding’ entrance test, commonly used to select a spread of learners into a school, and yet had very few low ability learners in its cohort.

Grey Coats’ 12-page admission policy states 15 places are offered to language students with a fair banding system used to get a “balanced ability intake” for the remaining 136 places.

Prospective pupils have to sit a literacy and non-verbal reasoning test on an assessment day.

Key Stage four performance tables show the number of pupils at the school who were low attaining on entry was only six (4 per cent) for last year’s GCSE sitters. The majority of pupils, 86 (57 per cent), were in the high attaining bracket.