Schools are being warned not to use a new form that requires students to declare they understand this year’s grading process as a “waiver of rights”.

The Exams Office, a membership organisation for exams officers, has drawn up a template of a “candidate confirmation form” after requests from its members. Exams Office founder Jugjit Chima says it could provide reassurance for students and support schools.

Ane Vernon, partner at law firm Payne Hicks Beach, said that, after last year’s grading turmoil, it was not surprising schools were striving for “maximum clarity and transparency” this time. 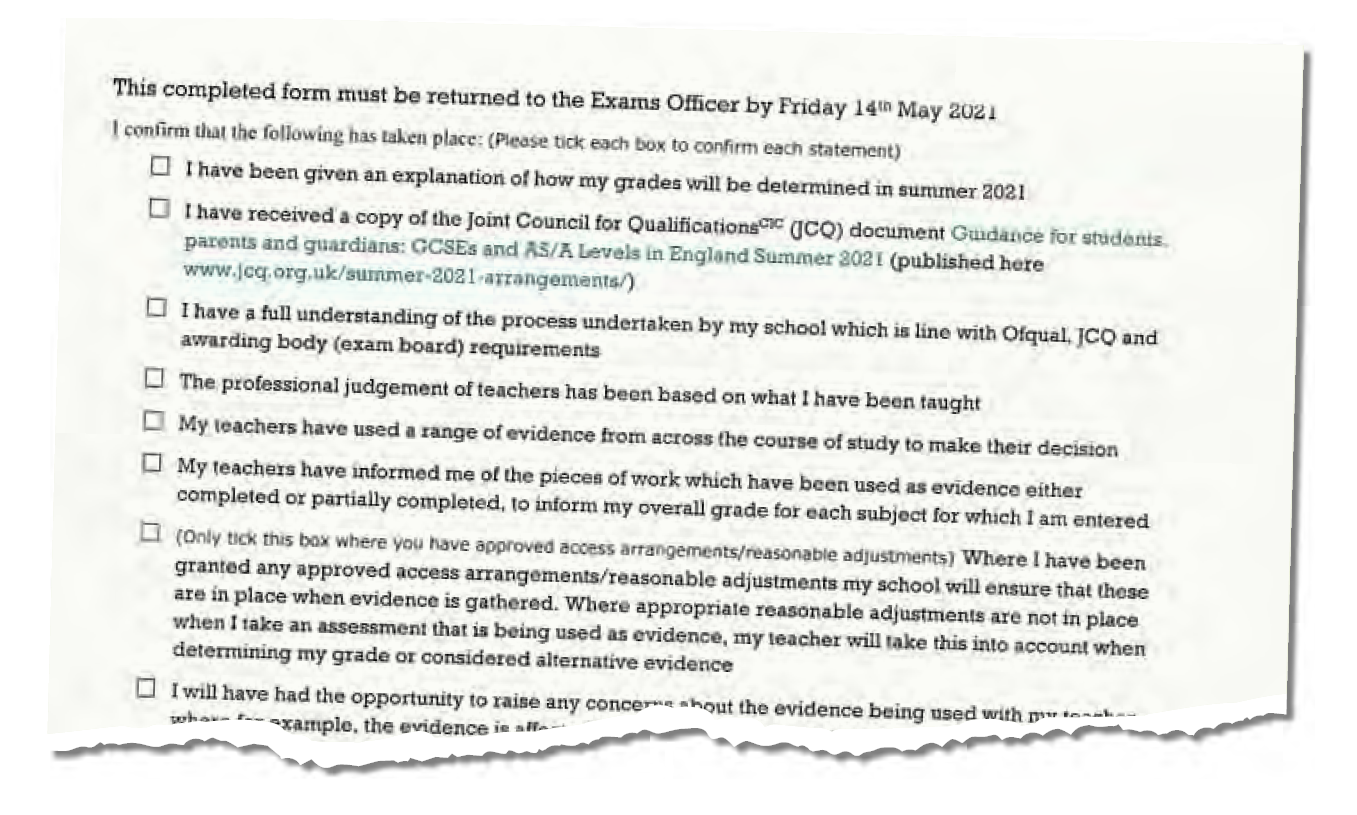 But she added: “Any attempt to obtain what could be seen as a waiver of rights or advance confirmation that the pupil accepts the school’s policy is likely to give rise to its own problems.

“At a time when students and their parents are under an enormous amount of stress, this could lead to complaints that such an approach constitutes an underhand attempt to close the door on routes of appeal.”

The template provides two suggested forms: one to sign prior to grading and another for use when teacher-assessed grades have been calculated, but before submission. There are up to 12 suggested check box points, but a school can adapt them as it sees fit.

The first suggests students sign to say they are aware of and understand how grades will be awarded. Another asks signatories to confirm that their teachers have used a range of evidence and that they have not negotiated their grades. Students could refuse to sign it if they believe the process has not been followed.

Chima said the template had been well received as it provides “clarity to both students and teachers and for ensuring that the [grading] procedure and processes … are adhered to”. It also reduces confusion and uncertainty for students, he added.

Ofqual has confirmed to Schools Week that the forms are optional, so they would not be studied as part of any quality assurance or when appeals were considered.

The Joint Council for Qualifications, which is coordinating approaches for exam boards this summer, said it was not involved in the production of the forms and that there is “no JCQ requirement” for centres to complete these forms.

Joe Woodcock, community engagement manager at The Student Room, said the forms could be a “springboard” for students to fully understand the grading process and encourage them to ask questions.

Tom Middlehurst, a specialist at school leaders’ union ASCL, said “schools and colleges may find them helpful in ensuring they are consistently and fairly applying their own procedures and policies”.

But Jonathan Mountstevens, deputy head at Beaumont School in St Albans, Hertfordshire, said: “I do not think it is fair to require students to confirm things which they cannot know for sure, such as how a judgment has been reached or reviewed… Students are going through a very tough time and I think there is a danger of making it even more stressful for them if we ask them to plough through a complicated checklist.”

In a normal year, students would be required to sign a declaration when submitting work for subjects with coursework and non-exam elements to confirm that the work is their own.

Mountstevens said a “short, simple declaration” for students to confirm that the work is their own and that they understand “attempts to gain an unfair advantage will be reported to awarding bodies and could hold serious consequences” would be better.

“These things are under their control and it is fair to hold students to account for them,” he added.

An Ofqual spokesperson said: “It is for membership organisations like The Exams Office to respond to questions and requests for information from their members, and to provide support materials where that might be helpful. Schools and colleges can then decide if they want to use them.”