MPs grilled education secretary Damian Hinds at the House of Commons this afternoon, alongside the children’s minister Nadhim Zahawi, the schools minister Nick Gibb, and the skills minister Anne Milton.

Issues including T-levels, GCSEs and exclusions were on the agenda, as well as other topics such as the swimming curriculum. Here’s what we learned.

The education secretary sought to brush off concerns about the impact of the new GCSEs on the mental health of pupils.

Lucy Powell, the former shadow education secretary and MP for Manchester Central, quoted headteachers who have recently warned that the new GCSEs are “inhumane”  and said less able pupils will end up as “collateral damage”, as will young people’s mental health in general.

She wants the Department for Education to assess the impact of the new GCSEs and asked whether private schools which have opted out of them will be forced to take them as well.

“To be fair, I don’t think the concept of exam stress is entirely a new one, and at this time of year obviously there is heightened stress among some young people,” he added.

“But these new GCSEs and A-levels have been designed and benchmarked against the leading systems in the world to make sure that we have a leading exam and qualification system.”

2. The government thinks it has made ‘good progress’ on T-levels

Hinds was pressed by MPs about the new T-levels, post-16 vocational courses designed to have “parity of esteem” with A-levels.

Seventeen schools are among the first 52 providers selected to deliver the qualifications.

Earlier today, Marcus Fysh, the MP for Yeovil, asked about the progress so far. His comments follow reports of delays to the scheme’s rollout.

Hinds said the first round of T-level would help to boost skills such as construction.

“We have made good progress,” he said. “We have announced the providers who will deliver the first three T-levels from 2020, we have published the outline content developed by panels of employers, and have begun the process to select an awarding organisation to develop them.”

But shadow skills minister Gordon Marsden said clarity is needed on the subject of the mandatory 45-day work placements they will involve – something schools are expected to struggle with – and on “bridging options” for pupils aged 16.

He also pointed out that Hinds’ “own top civil servant” Jonathan Slater had suggested a further a delay, but was overruled.

Marsden described the new qualifications as “a magical mystery tour for young people which risks becoming a ghost train”.

“I don’t recognise the premise of that question,” Hinds replied.

3. Ministers are working to identify off-rolling by academies 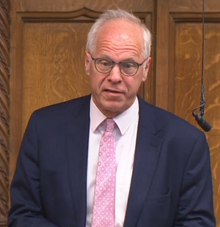 Former shadow schools minister Nic Dakin demanded to know what the government is doing to “address where academies are excluding people with special educational needs”.

He said the practice is contributing to an overall rise in exclusions. The rate of permanent exclusions has increased for the past three years in a row.

Zahawi said the government is looking at “different groups” and the “different proportions of those being excluded”.

“I hope through the Timpson exclusions review that will come out. We are also talking to Ofsted about the issue of off-rolling as well.”