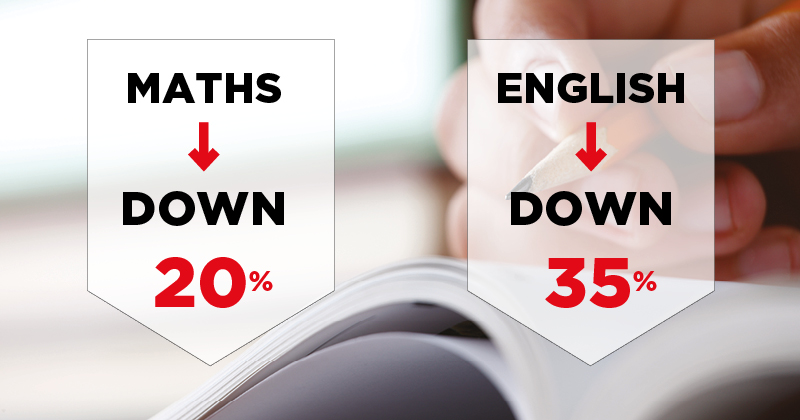 Schools and colleges are bracing themselves for a “significant” drop in English and maths A-level entries this year as pupils are put off by “tougher” GCSEs.

English looks likely to be the worst hit, with figures shared exclusively with Schools Week showing take-up of the subject at some sixth forms is dropping by 35 per cent, while maths is down about 20 per cent.

Bill Watkin, chief executive of the Sixth Form Colleges Association, said he feared the “love of the subject” for English and maths was “in danger of being overshadowed” by the standards now expected of pupils.

He shared provisional figures from eight colleges with Schools Week, indicating a “potentially significant” drop in take-up of the subjects.

One sixth form revealed that entries to English language and literature A-levels from September 2017 are currently down 35 per cent compared with last year. Entries to maths have fallen about 23 per cent.

Another sixth form fears that its English literature applications will dip 24 per cent, while maths will decrease 10 per cent.

Tougher English and maths GCSEs were introduced for exams this summer.

Higher-tier maths papers, for example, previously devoted 25 per cent to questions at the A and A* level. In this year’s exams, questions relevant to grades 7, 8 and 9, the new equivalent to A and A*, make up half the paper.

Research by the Mathematical Association (MA) shows further evidence of pupils shunning post-16 maths. In a Twitter poll of association members, a third said maths applications were declining in their schools. A second poll said entries for further maths were going down in about two in five schools.

Laura Jenkins, who teaches in Bournemouth, tweeted that her school received 115 applications for maths A-level last year, but this was down to 53 this year.

David Miles, from the MA, said many pupils had been getting “very low marks on their mocks so their confidence is being knocked; thus, they don’t want to take maths further”.

He added: “It also has a double whammy because teachers aren’t confident about the new number grades and are being cautious. They appear to be predicting one grade below what a pupil would usually get and, as such, the pupil is not meeting entry requirements.”

Funding changes for post-16s also mean many schools and sixth-form colleges will now allow pupils to take only three A-levels, which could lead to even lower entries for further maths as it is usually taken as a fourth subject.

Charlie Stripp, director of the National Centre for Excellence in the Teaching of Mathematics, said his organisation was “aware of early indications” of fewer pupils starting A-level maths. But he said the more demanding GCSEs should “be seen as a development”, rather than a deterrent.

A Department for Education spokesperson said: “Our new GCSEs will provide more rigorous content to equip young people with the knowledge and skills they need to succeed in the future.

“The maths GCSE has been designed to match the best internationally and will mean students are better prepared to study this vital subject at A-level.”

Maths A-levels took a similar hit when the two-part AS and A2 levels were introduced in 2002. The change resulted in A-level maths entries dropping 18.5 per cent.