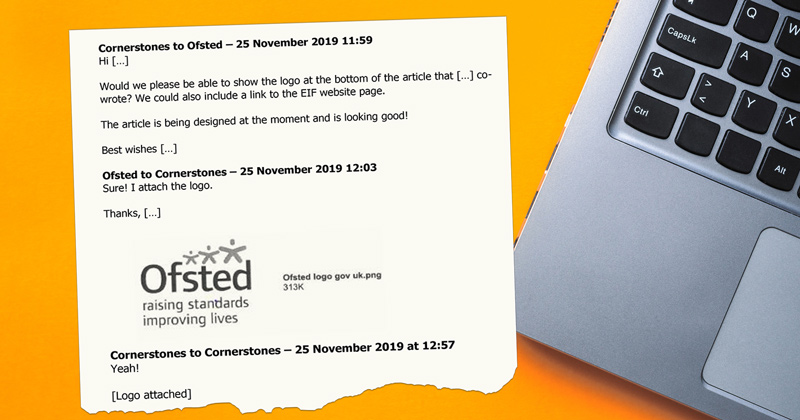 Ofsted did give permission to a private firm that sells curriculum packages to schools for thousands of pounds to use its official logo in a magazine, an internal email chain has revealed.

In February, Ofsted’s involvement in Cornerstones Education’s The Curriculum magazine was brought into question after the publication bore the inspectorate’s logo and the phrase “Ofsted-approved articles”.

Inside the magazine, two articles are said to have been “reviewed” by then Ofsted deputy director Matthew Purves.

At the time, the watchdog would only say it “does not approve commercial products” – and refused to confirm if it had given permission for the company to use its logo.

However, a Freedom of Information request for correspondence between the organisations shows the inspectorate provided its logo for inclusion in the magazine.

In an email to Ofsted on November 25, Cornerstones requested: “Would we please be able to show the logo at the bottom of the article that […] co-wrote?”.

Less than five minutes later Ofsted replied, “Sure! I attach the logo.”

NEU assistant general secretary Nansi Ellis said public bodies such as Ofsted “should not be sending its logo for inclusion in commercial material precisely because such an action would give a company a de facto stamp of approval from the regulator”.

“Ofsted is bound by strict rules regarding the use of its logo and any use of it that could appear to be giving any endorsement of commercial ventures,” she added.

In guidance on its website Ofsted warns it “will rarely give permission for our main logo to be used by third parties”.

The watchdog has previously threatened to take legal action against a training provider for misuse of its badge.

Cornerstones Education helps primary schools build, develop and deliver their curriculum – with prices starting at £1,000 and dependent on the type of school.

The email chain shows Cornerstones approached Ofsted to fact-check the articles and provide frequently asked questions related to its new framework, to be included in its free magazine which is sent to “all 16,000+” primary schools.

Schools Week asked the inspectorate for any email exchanges between Ofsted and Cornerstones Education regarding articles featured in its The Curriculum magazine.

The emails provided were redacted in many places. Ofsted said this was when information related to “identifiable individuals” or when the information was “provided to us in confidence”.

But they also showed that Ofsted said it was “happy to get involved” with the magazine from the start and initially raised concerns about a draft which appeared like an “Ofsted checklist” – leading to a revision of the text.

An Ofsted spokesperson said this week they agreed to participate as “given its wide circulation, it was sensible for us to make sure the information going into schools was accurate”.

“That’s helpful for schools and means that we don’t have to undo myths and inaccuracies further down the line,” they added.

However, Ofsted said these actions do “not constitute ‘approving’ a particular company or commercial product, something that Ofsted categorically does not do”.

Cornerstones Education founder Simon Hickton, a former headteacher, said the firm’s use of the phrase “Ofsted-approved articles” was actually intended to reassure people the watchdog had not approved the product as a whole.

“Clearly stating ‘articles’ was important – it was absolutely vital because otherwise it could have been deemed that Ofsted were approving the magazine – which they were not. Or any of our products, which we would not expect. Ofsted won’t do that and shouldn’t do that,” he said.

As the magazine was the “Ofsted inspection framework edition”, Hickton said Cornerstones didn’t want to include the logo on its own without the caveat of it being attached to clearly signposted “approved articles”.

He added: “We could argue about the semantics of the word ‘approved’. They were co-written, edited and checked – what’s a better word than ‘approved’ for that?

“We could have used the word ‘endorsed’ but we actually felt that was even stronger and shouldn’t be used.”

Hickton said he had received a verbal apology from Ofsted’s communications team after since-deleted tweets had claimed the articles were not approved.