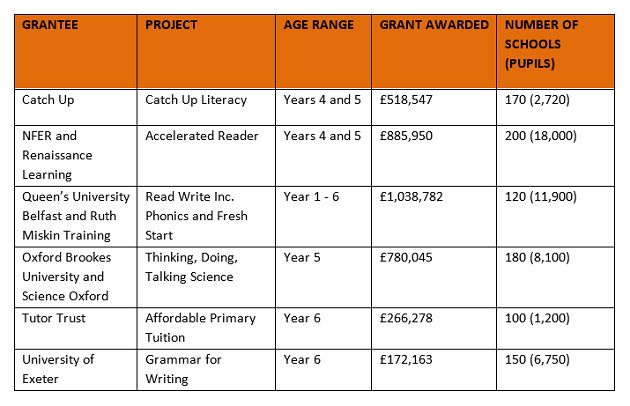 Hundreds of schools will be recruited to test six new tools aimed at improving reading, writing, maths and science.

The Education Endowment Foundation has announced it will spend £3.6 million piloting six projects in 920 schools with up to 48,670 pupils, with results informing its “teaching and learning toolkit” summary of educational research.

School leaders are now being encouraged to put themselves forward for the pilots, which have been launched today.

The largest single pilot will be Renaissance Learning’s Accelerated Reader programme, which uses a combination of software, dedicated reading time and ongoing professional development for staff to help schools “foster the habit of independent reading” among primary and early secondary pupils of all abilities.

In a previous EEF-funded trial, the programme was found to increase the reading age of pupils by three additional months, or five months for low-income pupils.

The new grant of £885,00 will be managed by the National Foundation for Educational Research (NFER) and will allow the programme to be tested in 200 English primary schools.

Catch Up Literacy, a teaching assistant-led programme which offers one-on-one intervention for learners aged between six and 14 who are struggling to read, will receive £518,547 to work in 170 schools.

A previous trial with a smaller number of schools showed the intervention had an impact of two additional months’ progress.

The University of Exeter’s Grammar for Writing project was also previously found to have an impact of two months’ progress, but across whole classes.

It uses a way of teaching writing “which helps pupils to understand how linguistic structures convey meaning”, rather than teaching grammatical rules “in the abstract”. It will receive £172,163 to work with 6,750 year six pupils in 150 schools.

Thinking, Doing, Talking Science is a programme being delivered by Science Oxford and Oxford Brookes University.

It trains teachers in a number of strategies to encourage pupils to use higher order thinking skills, and was previously found to have an impact of three additional months’ progress, or five months for less-advantaged pupils.

Recruiting university students and recent graduates, it provides a professional, paid-for tuition service at “a competitive rate”. The EEF is giving the project £266,278 to work in 100 schools with 1,200 year sixes.

Queen’s University Belfast and Ruth Miskin Training will team up to test their Read Write Inc. Phonics and Fresh Start programmes, which will examine the impact of the two systematic phonics-based literacy programmes.

Read Write Inc. Phonics is a whole-school approach for early readers from reception to year two and for children in years three and four who are not yet accurate and speedy readers.

Fresh Start is a catch up programme for those children struggling to read at the end of primary school. The two programmes will receive £1,038,782 between them, working with 11,900 pupils in years one to six in 120 schools.

Sir Kevan Collins, chief executive of the foundation, said: “We know that the six programmes we’ve announced new funding for today can all improve results for primary school pupils. But only by evaluating them on a larger scale will we be able to find out if they can be implemented successfully in many different schools.”

Schools can find out more and get involved online.