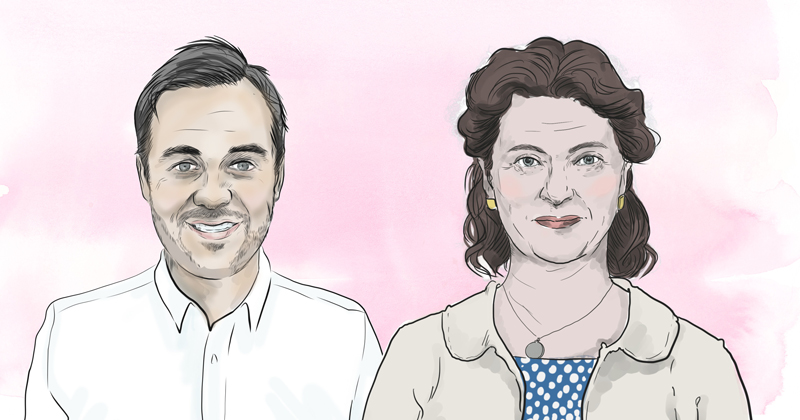 What are your top three priorities?

The first one is achieving every child in a good school.

I talk about a triple whammy: disadvantaged kids who have missed a lot of school, and who are going back to a weak school, and that it affects, and I really am passionate about the staff experience as well.

From what I hear it has not necessarily been the most positive experience if you are a member of staff in a school that has been struggling.

The second one is around safeguarding. As I came into the role I was told that I was going to give evidence to the independent inquiry into child sex abuse.

So I had to understand very quickly, in depth, our system.

I had already actually commissioned an internal review into all of these pieces of the system, because I wanted to be assured that any complaint that came in could be like a coin in a slot, and there were no cracks between any of the statutory or other agencies.

Third, I’m surprised I have become very passionate about the value of money and school resource management and helping schools to buy better – a bit like a money saving expert for them.

Being able to get value for money for them is a skill – or an art, actually.

(Your predecessor) Lord Agnew was very outspoken in his views about this: do you think that schools are wasting money?

No, not deliberately. If you look at your personal finances – why is it that we have this guilt culture that maybe there’s a better deal out there?

We have broken that down about individual spending in a way English people talk about getting a better deal, and we just need that in schools.

The way we’re connecting school business professionals, we are there trying to skill up and equip them and connect them to frameworks to get a better deal.

This is about help, there’s no shame in asking for a school resource management adviser.

We’ve only really had savings data from the resource advisers trial? When will we get to see more?

Obviously with Covid-19, it was not the time to have a relaunch but we have been working on that and I am moving away from that big figure of “we have saved x billion” to have much more detailed targets of what has been saved.

But yes, we should just be open about this because none of this money comes back to us in the department. It just gets recycled by the school to be spent on other priorities – and that’s what we need to make sure they can do.

On to safeguarding. What did your internal review find?

It’s a work in progress. A key thing to look at is, have we got the right data? If not, what data should we have and what purpose do you have certain data for? Unfortunately, things take longer than I would like.

Have you read the Everyone’s Invited testimonies? What was your reaction?

I met Soma [Sara, the website founder] around about a week ago.

I was saddened, actually, that young people found that was the way to make these claims known.

And it has challenged me about how do we ensure the victim’s voice or information about culture, because it’s not all offences… we do a consultation each year on keeping children safe in education, but is there a way to ensure that our consultation is rather like the consultation on exams, where about half the responses came from students?

MPs and various organisations have raised these issues with the DfE for years. Why was nothing done at the time?

It’s not true to say that we haven’t done anything.

We responded to initial concerns back in around 2016-17 about peer-to-peer abuse. Of course, you’ve had the explosion of the use of social media through this as well.

We do need the Ofsted review to look at the framework of inspection.

They are going to talk to over 900 children and young people during this process as well.

There is scope to consider all options when the review comes out.

The first safeguarding document went out in 2006 – this is relatively new. It does take a long time to embed things in and change culture. We’re still on a journey.

What do you want to see from schools in response to Everyone’s Invited?

Many schools will have taken action. I am looking at bringing together a group of the main schools because I want to meet both sides of this equation.

But most schools take the safeguarding responsibilities really seriously.

They are the second highest referrers to children’s social care, so they are spotting stuff.

We also have over 70,000 people on the DBS [Disclosure and Barring Service] and barred list for children’s workforce.

I’m aware that – in more schools than I would like to think – that the designated safeguarding lead sometimes has to look at a kid and say, ‘You’re not going home tonight. I’m calling the police. I’m calling social care. You’re not safe.’

That’s not to say we can’t improve things, and obviously the shift in the culture has been raised, but most schools are doing this really well and take these responsibilities really seriously.

On academies, Gavin Williamson said this week that it is “no longer viable for schools to be single entities”. What does this mean for single academies?

If you are a “good” or “outstanding” school – now is the time you need to be giving that expertise across a wider group of schools. I know there are school leaders now who are thinking, ‘actually, I don’t want it to me on my own’.

For the person who’s sitting in their splendid “outstanding” isolation: think about the moral purpose here. We all have a responsibility to help these kids catch up. And we’ve got to work together.

We’re not going to outlaw that, but think carefully about what is your moral purpose in not sharing your excellent single academy trust with a wider group of schools.

I think it is a sort of a seminal moment: you should be thinking about all of the children, even in your locality, how can you have that participation in the system.

I do want to call them out and say, “please, now is the moment to spread your excellent practice across the system – for the benefit of all these kids”.

You’ve announced policies to nudge towards full academisation – will you make it mandatory?

It’s not currently on the agenda.

If we have all academies – will you allow a strong academy to leave a poor-performing academy trust?

The school itself is not a legal entity so we are not looking at any kind of divorce arrangements.

But there are, through the regional school commissioners (RSC), ways of giving that intelligence that we need to help improve the quality of that trust if it’s not delivering the support services that it’s supposed to.

I’d hoped that they would talk to the RSC about how to improve the quality and get more involved in their own trust to help improve that quality across the schools.

What’s happening with free schools – has the programme lost momentum?

A: No, it hasn’t lost momentum, but we’ve had a pandemic. We didn’t get free school money in the one-year spending review. That was the biggest signal to me of the state of the public finances.

I just don’t know [the size of the next free school wave]. We’re going to approach a spending review process, [and] I never would have predicted that we wouldn’t have got any money.

United Learning got the EdTech Demonstrators contract. How does the ESFA handle the tensions between being the regulator for the trust, but also partnering with it on a flagship scheme?

We will be managing the contract to ensure it delivers the performances of that contract. We have to be transparent – it has to deliver.

But it’s important that MATs are doing this in the school system. I want to see MATs as the home of school improvement. Keeping all of this investment in the system can only be of benefit to the entire school system.

Do you think it was right for the department to sue a council and threaten schools in order to keep them open?

We did everything we could to keep schools open as long as possible because schools are the biggest protective factor for vulnerable kids.

Keeping vulnerable children in school was something we did well in that second lockdown. It’s something we should be very proud of

I think, as someone living in London, the feeling of the tectonic plate that shifted across Christmas and the Kent variant was just extraordinary.

Keeping vulnerable children in school was something we did well in that second lockdown. It’s something we should be very proud of – I don’t think many countries did that.

We’ve been banging on for years about unpublished academy scandal investigations such as Lilac Sky and Bright Tribe. What’s going on – will they be published?

I assure you, if there is intervention that we can do – if there is criminal or civil liability…

I have been briefed on all of those cases, and most of them we can’t publish because you prejudice proceedings. But I assure you that, as a lawyer, I want effective intervention, and those cases are in my inbox.