Teachers in the most challenging schools are being barred from shaping policy or sharing their expertise as government limits access to its schemes based on EBacc entry rates.

Analysis by Schools Week has found at least five Department for Education initiatives where a quota of pupils entered into the English Baccalaureate (EBacc) was part of the eligibility criteria.

Last week, it was announced new lead behaviour schools helping others tackle unruly behaviour must, as well as be rated ‘outstanding’, have EBacc entry rates at or above 45 per cent.

Meanwhile, the DfE is advertising for a new member on its teacher reference group, which advises officials on the potential impact of policies in schools. However, only teachers from schools that have 45 per cent of pupils entered into EBacc may apply.

Geoff Barton, general secretary of the Association of School and College Leaders, said: “It makes no sense to make EBacc entry a condition of anything, and smacks of flogging a dead horse.”

He added the EBacc criteria was “unreasonable”, and pointed out that being a behaviour hub was “patently unconnected” to the measure.

Analysis by Education Datalab shows 61 per cent of secondary schools did not have a 45 per cent or above EBacc entry rate last year.

Furthermore, their analysis showed certain areas are harder hit. For instance, 75 per cent of schools in the north-east, the region with the lowest EBacc entry rate, would not be able to apply, whereas more in London would be able to.

Caroline Spalding, an assistant headteacher and former adviser, said the “flawed” decision means the DfE won’t hear the voices of teachers in the “very schools they hope to persuade that the EBacc is a useful measure”.

She added the DfE was “mistakenly conflating individual teachers with schools” and any limiting opportunities for teachers in challenging schools is “working against attracting and retaining strong teachers to the very schools that need them most”. 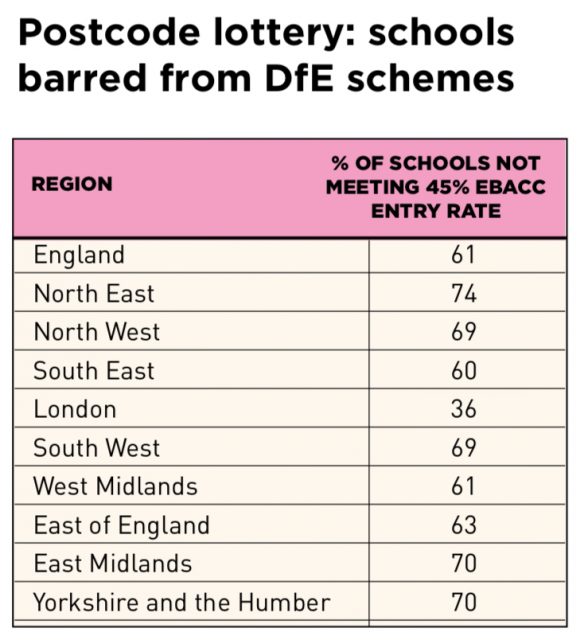 For primary schools, teachers must work at a school that has at least 90 per cent year 1 students meeting the required standard in phonics.

It is understood the current teacher reference group has raised concerns over the EBacc criteria to the government.

The 45 per cent EBacc entry is also a requirement to get a spot on the headteacher reference group, and to become one of the new teaching school hubs. Plus, academies wanting expansion cash must also hit EBacc entry requirements.

Jonathan Simons, a former policy adviser at Number 10 and now director at lobbyists Public First, said that the government using “all of its levers” to promote a policy object was “legitimate”.

But he added: “There’s a risk that linking it to unrelated issues – such as whether a teacher is good enough to advise DfE on a reference group – causes frustration.”

However, the EBacc measure is also coming under increasing pressure.

The Russell Group of elite universities has already ditched its list of “facilitating subjects” amid concerns that too many pupils felt they had to study only academic subjects to get into university.

The government had to drop a statement on its website stating that the country’s top universities believe the subjects “open more doors to more degrees”.

Barton said it was “another sign that the government needs to consign the EBacc to history”.

He added it’s not necessarily the “right combination of subjects for all students. It has been superseded by progress 8, and the government target for entries is unachievable because there are not enough foreign language teachers in the system to deliver this element”.

The DfE has pushed back its target to get 90 per cent of pupils studying the full suite of EBacc subjects until 2025. The current EBacc entry rate is just 40 per cent. A DfE spokesperson said the EBacc “opens doors for future study and employment and therefore we actively encourage schools to enter pupils in these subjects”.

It’s just the latest example of the government using its levers to shape school behaviour towards its own objectives. For instance, schools who applied for repairs cash last year had to agree to a visit from a government cost-cutting consultant to get the funding.