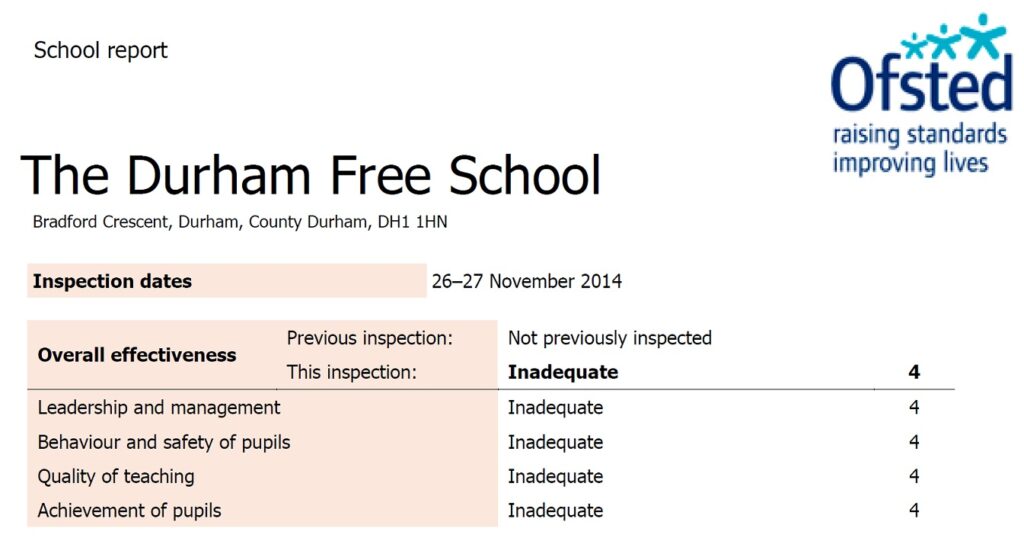 Governors at Durham Free School have claimed Ofsted inspectors were “prejudiced” when they visited the school, in a damning statement issued this afternoon.

The school was given an inadequate rating on Monday morning and later that day education secretary Nicky Morgan told MPs she intended to terminate its funding with the Education Funding Agency (EFA).

Ofsted’s report said achievement at the school, which caters for 94 pupils in Years 7 and 8, was “weak” and raised serious concerns about the school’s religious studies curriculum, claiming many pupils held “prejudiced views” of others.

The concern of the governors is shaped around an issue surrounding the departure of the former headteacher, who is alleged to have made allegations about the school to the Department for Education (DfE) and the EFA.

The governors have released a long statement about its inspection, which took place in November, and claims “there is clear evidence that the inspectors were prejudiced by the allegations”.

The letter claims pupils were asked about female genital mutilation and said other questions such as “what would you do if a Muslim came to this school?” and “do you know anybody in the school who is gay?” were put to the children.

The governors rebuffed claims by Ofsted that they focused on candidate’s religious credentials, rather than track record and talent when appointing new staff.

They said: “The trust asserts that when recruiting senior staff who need to understand the Christian ethos of the school and who will need to lead Christian collective acts of worship in the school, it is a genuine occupational requirement that the staff member is a Christian.

“However, even if this is set aside, the trust believes there is no evidence of governors ever appointing a Christian ahead of a non-Christian who better fulfilled the requirements of the role.”

The governors add: “The trust believes that it is not in the public interest that the school should close. It is fulfilling a gap in provision for communities which are otherwise disadvantaged in local provision in comparison to more affluent areas.”

An Ofsted spokesperson said: “We judged this school to be inadequate across all criteria and the government has withdrawn its funding.

“Inspectors are trained to handle sensitive issues with care and in an age appropriate fashion. Ofsted takes all concerns about its work seriously, and will consider any issues raised about individual cases through our complaints procedure.”