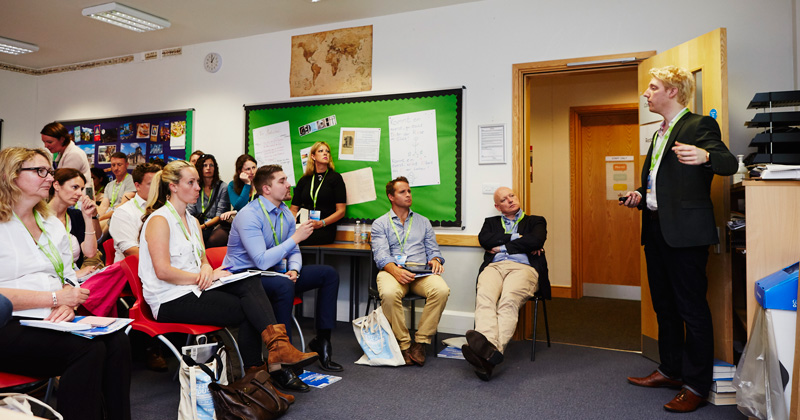 “Rigorous” teacher training could change the perception that the profession is not “prestigious”, says a London teacher.

Kris Boulton, deputy head of maths at King Solomon academy in north London, told a packed festival room that teachers needed to “earn the right” to be seen on the same level as other professions such as doctors, lawyers, and barristers.

He said that the Teach First programme, a scheme that placed graduates from the country’s top universities into challenging schools, had partly changed this perception, but “there is much more that needs to be done”.

Boulton told delegates: “I am scared to just say that I am a teacher, I almost always respond with a variant of that. I do that because I am usually looking for some sense of prestige. “I live with three barristers and when they introduce themselves to people, they are proud and get a great response.

“Yet when I do a similar thing the response I tend to get is ‘oh, you must really like kids’; the implied assumption is that I must not have had a lot of choice or I am not that smart.”

He added that reality TV programmes helped people to see that teaching was a “tough job”, but one that sat on the same level as coalmining, for example.

“When we talk about prestige we get held up in this idea of talent and accomplishment. But that isn’t there for teaching right now.”

Boulton said that teachers would not “win this battle for prestige” by telling people to stop undermining the job. “It will be won by earning people’s respect.

“It is a difficult truth but I don’t think we have earned it yet.

“I felt that my PGCE didn’t give me any sense of status, because I didn’t need to know anything. The bar is very low and it was too easy to pass.

“Not a lot of trainees learn enough about their subject and pedagogy. When everybody can pass, we will never get that sense of prestige.”

Boulton did, however, recognise that half a million teachers were needed and they would be hard to find.

“But don’t assume that if you raise the bar then we will have fewer people getting through, sometimes the reverse is true.”

He suggested that one way to push teaching to a more “respected status” was by introducing a prestigious route into the profession.

“In Japan they have multiple entrance routes into teaching, there is a really difficult elite route where only a few pass, then there is a more mainstream route and then there is a specialist route.”