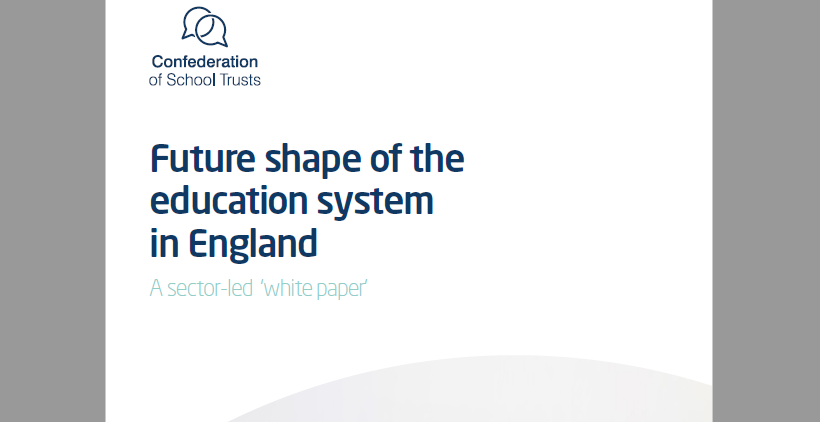 The Confederation of School Trusts – a sector body for academy trusts – has published what it describes as a sector-led white paper today.

Proposals include to ditch the “divisive language of MATs [multi-academy trusts] and SATs [single-academy trusts]” and set up a new independent regulator. (Read our news story here).

Here’s your trusty Schools Week round-up of the key points of CST’s masterplan.

As well as a timeline to properly introduce the national funding formula and more cash generally – CST wants investment to build the capacity of school trusts. This will help “grow the right school trusts in the right places” and “incentivise community-led and spin-out trusts”.

The mention of “community-led” trusts is an interesting one – and not something we’ve seen massively in the sector at trust level (parents and community groups did set up free schools in the early days of the programme).

There are examples of spin-out trusts, though. They include Delta academies trust (set up by Paul Tarn who moved from Outwood Grange) and Reach South and Astrea Academy Trust, both set up by REAch2 staff.

CST believes completing the “reform journey” is likely to take another ten years. “We cannot limp on indefinitely with a two-tier system which leaves smaller maintained schools vulnerable as local authorities retract their school improvement services.”

Whilst making clear they don’t propose compulsory academisation, the organisation wants to nudge conversion by offering more cash to entice schools to form or join a trust, as well as speeding up the process of conversion and capping the cost of converting (which Schools Weeks has previously revealed is being passed onto schools).

The role of local authorities also needs setting out in legislation.

On improvement and accountability, CST wants a single regulator (combining the regulatory functions of regional school commissioners and the Education Skills and Funding Agency). The non-departmental government body would report directly to parliament.

The CST also wants legislation to allow intervention at trust level, rather than just school level (the government is able to intervene at trust level by parachuting its own people to become members of trusts – but this in only normally done where trusts are closing down, not just for poor performance).

4. Create a ‘body of evidence’ on good teaching

On teacher professionalism, the CST calls for a “body of evidence that underpins teaching” and is published by the Education Endowment Foundation and the Chartered College of Teaching.

The group also calls for a “coherent set of standards” from initial teacher training through to exec leadership alongside an ethical framework (this sounds like the ASCL ethical code, and it’s also not clear where the well-established Nolan principles fit in with this).

Calls to also develop a professional qualification in curriculum design have already seemingly be answered – it’s one of the five new NPQs outlined in the DfE’s recruitment and retention strategy.

CST wants a new standard drawn up for trust governance, based on best practice in other sectors. It comes amid concerns that trustees who oversaw academy scandals faced little action. Other points on governance include more training.