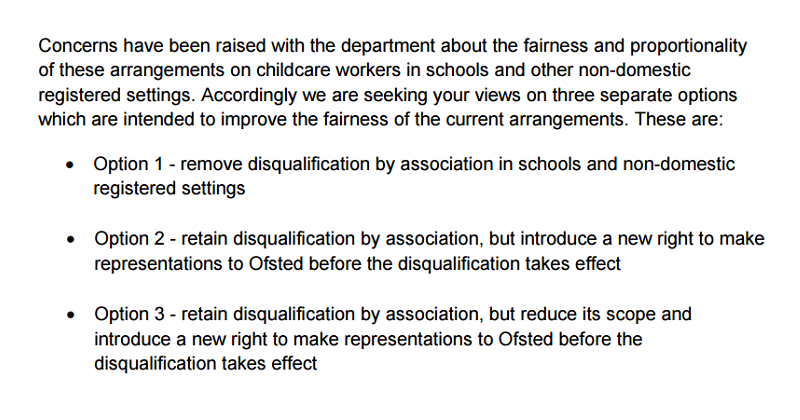 Controversial safeguarding rules which caused teachers to be unnecessarily suspended from work could be scrapped, the government has announced.

The Department for Education has launched a consultation on disqualification by association rules, which currently require staff working with young children to apply to Ofsted for a waiver if they live with anyone with spent convictions for certain types of crime.

The government is proposing three options – the removal of the rules from schools, the introduction of a right to make representations to Ofsted before disqualification takes effect, and a reduction in the scope of the rules.

The rules have been widely criticised for their impact on primary schools which were forced to suspend teachers, support staff and even headteachers who had done nothing wrong themselves but had to wait for waiver decisions.

In one instance, lawyers reported that a head whose husband was previously convicted of domestic violence against her was suspended as a result of the policy.

The requirements, included in the 2006 childcare act, were initially thought not to apply to schools, but guidance issued in October 2014 brought schools within their scope.

The guidance has been heavily criticised for causing confusion, not least because the list of crimes sparking a potential disqualification is long and not exhaustive.

The policy change also created additional work for Ofsted, which told Schools Week earlier this year that a substantial proportion of the 3,000 waiver applications received were completely unnecessary.

The watchdog is not believed to have rejected a single application since the guidelines changed.

The National Association of Head Teachers, one of the groups to have campaigned against the rules in schools, has welcomed the new consultation.

Russell Hobby, the union’s general secretary, said: “The disqualification by association rules were designed for childcare providers only, and add nothing to the robust safeguarding procedures already in schools.

“We thank the government for listening to NAHT concerns on this important issue, and look forward to submitting evidence to help make the system work better for school leaders.”

Unison, which represents a large number of support staff in schools has encouraged schools to call for the rules to be fully scrapped.

Ben Thomas, Unison’s national education officer said the regulations did “nothing to promote safeguarding in the early years sector” and urged school staff to “complete the consultation and select option 1 to abolish the DBA regulations for early years staff”.

In the consultation document, the government admitted that while it had attempted to make the guidance clearer three was “widely-held view” that the rules were complex and unfair.

The options presented in the consultation document are as follows:

Schools have until July 1 to respond.