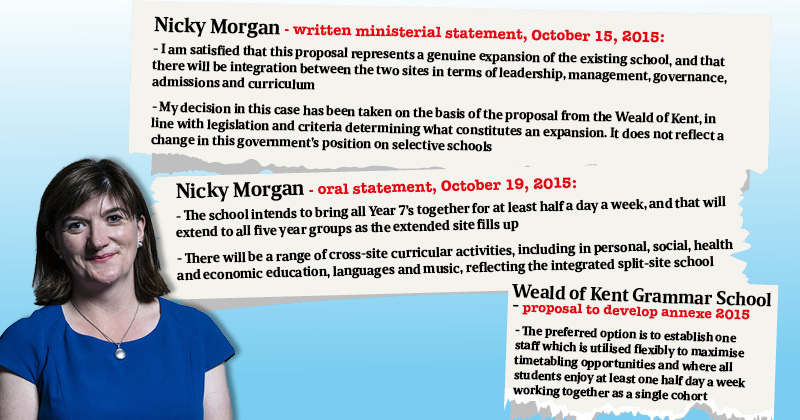 Ministers are under pressure to investigate a grammar school that has now stopped sending  pupils to its satellite site – despite the arrangement being a key justification used to prove it was working as a single school.

In October 2015 the Weald of Kent Grammar School was given permission to open a satellite site nine miles away in Sevenoaks.

Justifying the decision, Nicky Morgan, the then education secretary, insisted the sites would function as one school, including a “cross-site” curriculum that would bring pupils together at least once a week.

New grammar schools are illegal, but existing schools can apply to expand, including on to separate sites.

However, Elizabeth Bone, Weald of Kent’s headteacher, has confirmed that from this year pupils will be taught separately and only brought together for extra-curricular days.

“A full and proper independent investigation of the practices at the Weald of Kent grammar must take place urgently to ascertain whether the school is acting within the law and to the letter of their agreement with the Department for Education when this school was established,” she said. 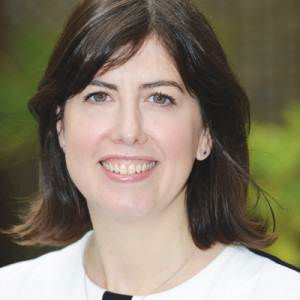 Two other grammar schools in Kent – Barton Court in Canterbury and Queen Elizabeth’s in Faversham – have also applied to open new satellite sites.

Only one of the selective schools will get permission, expected this autumn, to open a new campus near Whitstable.

Dr Nuala Burgess, the chair of the anti-selection campaign group Comprehensive Future, said: “Until Sevenoaks has been properly investigated, plans for all new grammar satellites must be put on hold. If not, we can only assume that the surreptitious creation of new grammar schools was always the hope of the selective school expansion fund.”

She said the way Weald of Kent ran the two sites was no different to an academy trust with two schools. The satellite was “tantamount to the creation of a new selective school via the backdoor”.

The school’s proposal for the annexe, which opened in 2017, also said its headteacher would spend half the week at each site and pupils would “enjoy at least one half-day a week working together as a single cohort”.

The school declined to comment on how often the headteacher visited each site or whether there were two separate teaching teams, but Bone said leaders “attend both campuses” and governance and administration were shared.

She insisted it was “one school which operates across two campuses”. Pupils initially travelled between sites once a fortnight for lessons, but the school was now able to deliver specialist teaching at both campuses “in a manner that represents the best use of public funds”.

The government has set up a £200 million expansion fund for selective schools. Guidance states that grammars can only expand to a satellite site if it is “genuinely part of the existing school” and not the establishment of a new school.

Decisions are made on a case-by-case basis, considering factors such as pupil movement between sites, staff working on both sites, shared facilities and governance.

Geoff Barton, the general secretary of the Association of School and College Leaders, said it was “of paramount importance that we have absolute clarity over exactly what constitutes expansion, at what point this tips over into being a new school, and what happens in such circumstances”.

Weald of Kent’s funding agreement is for a single school and the government can act if it is in breach of this.

But a DfE spokesperson said: “On the basis of the evidence available to the department we are content that the school continues to operate within the criteria for expansion.”