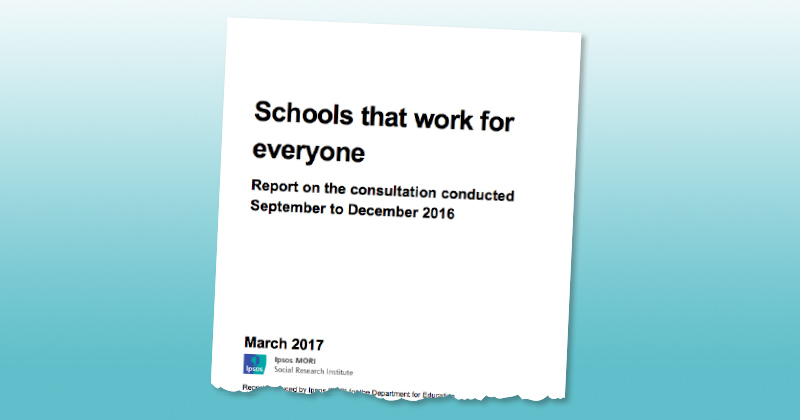 The Department for Education is refusing to name the 16 campaign groups whose responses to the grammar school consultation were discounted from its final analysis.

In the responses to 2016’s Schools that work for everyone consultation, which proposed expanding selective schools and changing faith schools admissions, 80 responses from 16 “potential campaigns” were excluded.

However, the Department has claimed it does not know the identities of the 16 groups as the information is “not held by the Department”.

Officials responding to a Freedom of Information request for the information said that the excluded responses “were identified as duplicates or were blank responses”, and officials do not know who they belonged to.

Melissa Benn, from the anti-selection campaign group Comprehensive Future, said it was “mystifying, if not bizarre” that Ipsos Mori, who did the analysis, was not given “a significant number” of responses from “potential” campaigns “but that the DfE claims not to hold any information on those individuals and groups whose evidence was not considered”.

“Comprehensive Future submitted a lengthy document to the Green Paper consultation – a response neither blank nor in duplicate – and we are now keen to know if our hard work was treated in such a cavalier manner.”

The government’s response to the green paper, along with Ipsos Mori’s analysis, was published in early May, more than 500 days after the consultation closed.

It failed to provide exact numbers and proportions of respondents in support of the proposals, opting only for vague indications of support and opposition.

Schools Week has appealed against the Freedom of Information response.