The Department for Education has revised up its pupil number predictions for 2030, but said the population will still shrink by over 5 per cent over the course of the decade.

National pupil projection data, released by the Department for Education today, predicts the state school population will shrink by 398,000, or 5.1 per cent, between 2020 and 2030.

The release uses 2020 as a baseline because the 2021 school census data shows “notable decreases in enrolment in nursery and primary schools and alternative provision compared to previous years”.

These are “expected to be temporary, as a result of the pandemic, rather than long-term changes”, but using 2021 data “results in decreases across future years which are not considered to be realistic estimates of the pupil population over the next ten years”.

Here are the key statistics from the annual release.

However, the total projection for 2030 is 10,000 more than the DfE predicted at the same point last year.

The DfE states this is primarily down to participation rates being “very slightly higher” in its updated model “due to the ONS population estimates for 2019 being slightly smaller than the figures previously forecast for that year”.

2. Secondary and special school numbers to peak in 2024

As predicted last year, the number of pupils in secondary and special schools are still expected to peak in 2024 before gradually dropping. 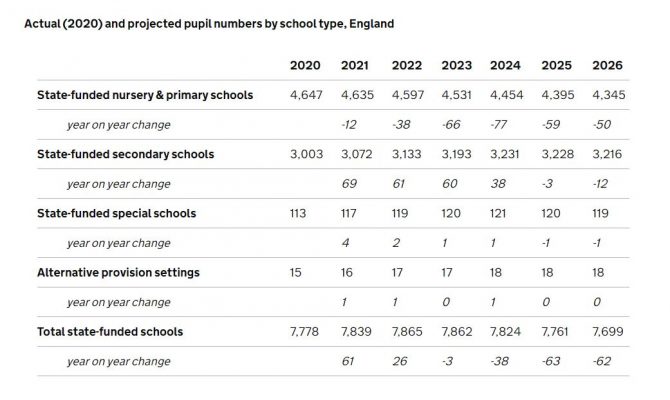 The DfE said the number of births “feeds directly into the projections”. The birth rate increased for over a decade leading to 2013 when it “dropped notably”. There was then a period of stability before rates once again dropped from 2016 onwards.