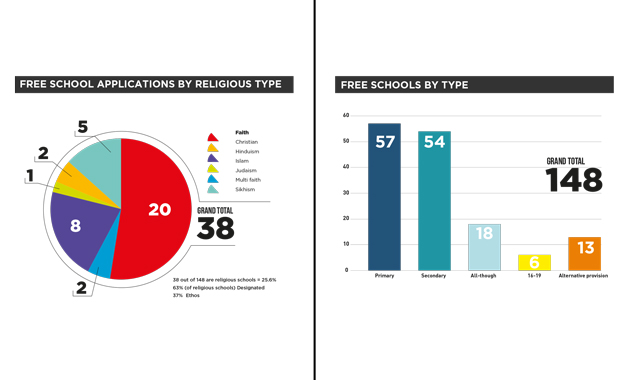 The Department of Education (DfE) has released details of the most recent wave of 148 free school applications, despite fighting to withhold the information on seven previous occasions.

The wave eight list of free schools applying to open in 2015 and beyond was provided to the British Humanist Association (BHA) in response to a Freedom of Information (FOI) request. The BHA has long-standing concerns about state funding of religious schools. Applicants with a faith designation or ethos account for a quarter of schools on the latest list.

Spokesperson for the BHA Richy Thompson said: “Before the free schools programme it was always the case that the public knew who was applying to set up schools locally before any decisions about the proposals were taken. The fact that in recent years this has not been the case has represented a serious democratic deficit and we are pleased that this is starting to be rectified.”

Mr Thompson says the BHA remained concerned about the “large number of applications from religious groups. It is vital that every school is equally inclusive to all children, parents and teachers, regardless of their religious or non-religious beliefs.”

The list includes eight applications for Muslim schools. Of those eight, five are for primary schools submitted by the Tauheedul Education Trust. The five are proposed for Birmingham, Bolton, Coventry, Preston and Waltham Forest.

Tauheedul Education Trust already runs six free schools and one academy. These include Tauheedul Islam Girls’ High School in Blackburn, Lancashire, which achieved a high pass rate for its most disadvantaged students.

The only other one of the trust’s schools to have received a full Ofsted inspection so far is Tauheedul Islam Boys’ High School in Blackburn, which has also been rated as outstanding.

The list contains three applications for free schools either affiliated to the Steiner Waldorf Schools Fellowship (SWSF) or influenced by the Steiner ethos.

Kevin Avison, senior adviser to the SWSF, said that while Stroud Academy in Gloucestershire did not have “Steiner” in its name and “was not able to fulfil our criteria at this time”, it had “gone ahead to the interview stage”. The proposers of Steiner Academy Truro in Cornwall had been interviewed and were awaiting a decision.

A DfE spokesperson said: “The application process is the first stage of opening a free school and all proposals are rigorously assessed before they are approved. Once opened, the schools are fully held to account by Ofsted for their performance. The list of recent free school applications was released in response to a Freedom of Information Act request, in line with our commitment to transparency.”

The window for applications to open a free school in wave nine is from Friday May 22 until Friday May 29.