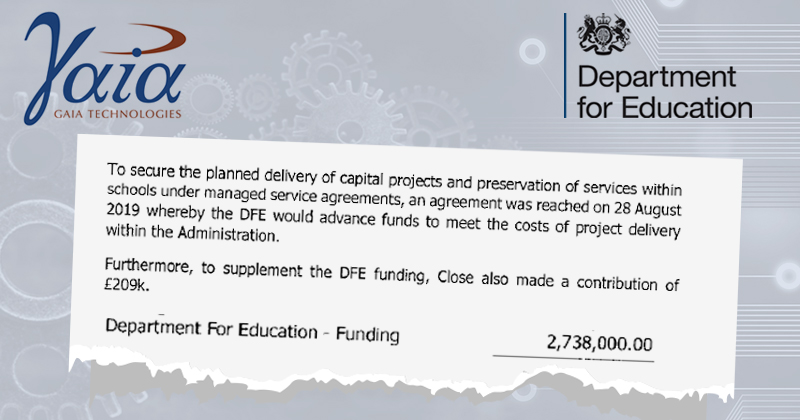 The Department for Education paid £3 million to stop a cash-strapped ICT supplier to schools collapsing after it entered administration.

In August, Gaia Technologies entered administration amid “severe cashflow issues”. The Welsh firm was listed among the DfE’s approved ICT service suppliers and described itself as a “leading provider” with 500 education customers.

However it has now been suspended as a supplier, with documents filed by administrators showing that the firm is £5.8 million in the red. Gaia owes cash to 192 creditors, including over £860,000 to HM Revenue and Customs.

But the document also reveals that in order to salvage Gaia’s school projects “at risk of not being completed” an agreement was reached “whereby the DfE would advance funds” to the tune of £2.7 million.

The department will also foot over £200,000 of the joint administrators’ trading costs. The DfE said the latter, paid in August, was to ensure delivery of “essential contracts” by Gaia and “ensure minimal impact on schools” ahead of September open dates.

Accounts filed last year show the company turned over £19 million and won more than half of contracts available within the DfE framework.

Mark Orchison, managing director at education technology consultancy agency 9ine, previously estimated that hundreds of schools who depend on ICT services from exterior providers are at risk of having assets sold from underneath them if these firms collapse.

He said: “It is surprising … that the DfE has not been actively monitoring the supplier to whom they have awarded over 50 per cent of education contracts on their crown commercial services.

“This really calls for school leaders to ensure they have a robust supply chain, and contracts where they have title over equipment should their suppliers fall into administration.”

Gaia claims it has provided services to a number of well-known clients such as the Ormiston Academies Trust, the JCB Academy in Staffordshire and the Sheffield Community Academy.

Explaining the firm’s downfall Collier stated: “Gaia Technologies has grown rapidly over the last few years having secured a number of significant contracts, but unfortunately severe cashflow issues have resulted in it being placed into administration.”

The “statement of administrator’s proposal”, filed last month, stated six offers to buy the firm have been tabled, but adds no further information can be provided so the sale process isn’t compromised.

In the company’s most recent financial accounts, it says: “We believe our current financial position is secure with already so many won business for the future, solid recurring revenue, sustainable and strong profit streams, and growing managed services adoption in the educational market as well as the public sector in general.”

However the accounts also state the education budget is “still coming under pressure and continues to affect schools spending confidence, not helped by the uncertainty surrounding Brexit, and thus their expenditure in many areas, especially in ICT, as after salaries ICT is seen as the largest cost centre in many schools”.

“This, combined with build projects delays, has affected our turnover this year.”