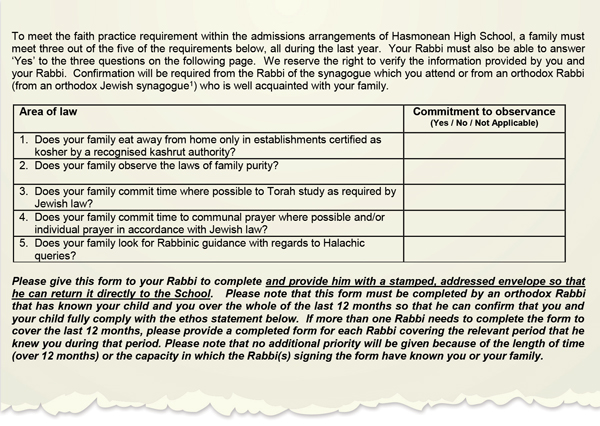 A Jewish secondary school in north London has been ordered to change its admission requirements after complaints that parents could be asked to disclose information about their sex lives.

The Office of the Schools Adjudicator (OSA) has upheld objections from the Fair Admissions Campaign relating to admissions rules at Hasmonean High School in Hendon.

Campaigners objected to a section of the rules that required a rabbi to confirm a family had met three of five requirements in the preceding year, one of which related to observation of “laws of family purity” that govern, among other things, sexual activity during menstruation.

The OSA upheld the complaint, which was made on the grounds that the questions did not meet the school admissions code rules requiring “fair, clear and objective criterion”. It ruled that the requirement could be “embarrassing or intrusive” for some parents.

The adjudicator concluded that it “would not be possible to objectively assess whether or not a family observes the laws of family purity”, which contravenes the school admissions code requirement that all “practices used to allocate places are objective”.

The OSA also upheld a complaint about the school’s requirement that a rabbi complete a form confirming a family’s observation of various elements of Orthodox Jewish faith, despite the fact a family might not know the rabbi in question.

The ruling has been welcomed by Rabbi Jonathan Romain, chair of the Accord Coalition for Inclusive Education, who said school should be about “children and developing their education”, and not “checking up on the religious observances” of parents.

“This case, along with numerous ones affecting church schools, highlights the pressing need to take faith criteria out of admissions procedures altogether. State school intakes should be open to all local children, irrespective of any religious practices that do or do not occur at home.”

The school has also been ordered to delete questions about children’s attendance of an Orthodox Jewish primary school from its “supplementary information form”, on the grounds that although this was not a requirement, some parents might believe that it was.

A Hasmonean spokesperson said: “We are reviewing and updating our admissions policies to ensure that we abide by the current regulations governing admissions, that our school’s ethos is upheld and that we reflect the needs of the Orthodox Jewish community.”

In his determination document, schools adjudicator Phil Whiffing said it had “taken into account” that the objection was not made by a member of the community that the school aimed to serve and that the “determination will be published very shortly before applications for school places in 2016 have to be submitted”.

Mr Whiffing added that the school had “already made some changes to the rabbi reference form and supplementary information form to address aspects of this determination”, but said the more “fundamental question” of how the school determined whether an applicant was an Orthodox Jew in an objective way would “require consultation”.

He said: “I do not think that it would be possible to resolve this question in two months. Nor do I think it would be fair to parents who have already made applications to the school for the basis of their adherence to the faith to be altered at this stage in the process, or that it would be practicable to do so. I will therefore be requiring the arrangements to be changed by February 28, 2016.”

It comes after the OSA ordered the Rimon Jewish primary school in Golders Green, north London, to change admissions rules that gave preferential treatment to attendees of certain synagogues, and the Etz Chaim Jewish Primary School in Barnet, also in north London, was warned about only giving priority to children of staff if they met a test of “religious practice”.