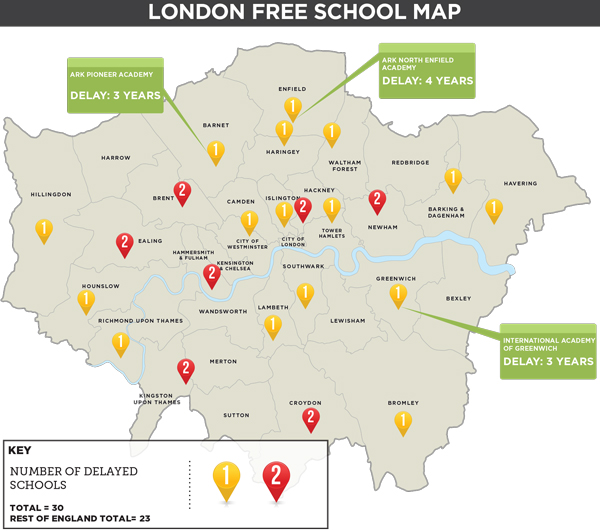 More than 50 free schools have postponed opening in the past two years amid concerns that some would not offer a good standard of education, Schools Week can reveal.

Figures released to the paper under Freedom of Information laws show 53 free schools have pushed back their opening dates since September last year.

All free schools receive a pre-opening grant, set at £220,000 for primary and £300,000 for secondary schools. It means these schools were given at least £11.7 million before educating a single child, although some now have pupils on roll.

Schools Week asked for a full list of the free schools that folded before they opened. The Department for Education (DfE) refused to supply one as it said the information would be published in the future.

The true cost of the delays is also obscured as schools can request additional funding in some circumstances, including if a principal was appointed before the announcement of any postponement.

Gladstone School in Brent has employed principal-designate Paul Phillips since January last year, but is yet to open. The job was advertised with a salary of between £78,000 and £88,000.

The DfE also would not release an itemised list of costs for each delayed school, stating that it published the total amount of grants on its website once the schools were open. This list was last updated in September and does not reveal the cost of schools that fail to open.

Paul Stubbs, from the DfE’s Free Schools Group, said officials balanced the risk of opening a school on the original date with it meeting requirements for a successful school.

He wrote in the FOI response: “Overall, deferrals will have occurred because the DfE did not believe that the free school trust was ready to open a school offering a good or better standard of education.”

More than half of the delayed schools (30) are in London, revealing the scarcity and expense of land in the capital.

ARK North Enfield Academy has been delayed for four years, with another two London schools delayed for three years.

Christine Bayliss, a former DfE civil servant and now education consultant, told Schools Week: “The problem is a symptom of a growing economy and difficulties securing a value-for-money site.

“The department is getting much better at recognising ‘risk’ and usually will only open schools in temporary accommodation where a permanent site has been secured but isn’t ready for occupation.”

She added some schools would have requested the deferral so that they could open when there was a demand for places.

This is the case for ARK North Enfield, which was given the go ahead without a site. Its opening was delayed after a local authority analysis found that demand for secondary places in the area would not increase until 2018, which is when the school now proposes to open.

Two other ARK schools in the capital have been delayed as they wait for a suitable site. A spokesperson said it was “a complex process, particularly in London, with a number of stakeholders. And we always seek to engage with the relevant local authority to determine that there is demand for a new school.”

Kevin Courtney, deputy general secretary at the National Union of Teachers, said the delays let down parents and exposed the failure of the free schools programme “to deliver the right number of school places in the right locations.

“While parents desperately struggle to get their children a place in a local school, the government continues to promote its ideological free schools programme instead of giving local authorities the legal powers to open new schools where they are needed.”

A DfE spokesperson said free schools were a critical part of a “vision for education which is led by parental demand for more good local school places and driving up standards across the country”.

Most had opened on schedule and those that did not had later dates agreed with the proposers.

“This might be because the school needs longer than anticipated to open or because the site is still being finalised.

“This is particularly the case in London where sites in the areas they are needed are at a premium.”