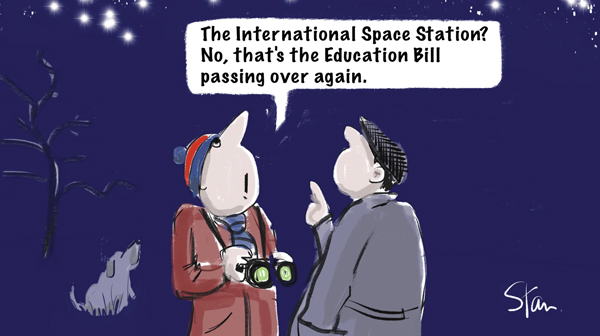 Former schools minister David Laws has been given government permission to join education charity and academy chain Ark as an adviser, just months after receiving a £15,000 donation for his failed general election campaign from the chain’s chair of trustees.

The former Yeovil MP joined Ark last month as a part-time adviser in its international division.

Schools Week revealed in April that he had received a donation to his election campaign coffers from hedge fund banker Paul Marshall, a founding trustee of Ark.

The £15,536 donation was given in an individual capacity to Yeovil Liberal Democrats. A dinner Mr Marshall hosted also raised £49,000 for the party’s campaign.

Our reporter discovered the donations after visiting the Department for Education’s (DfE) offices to view politicians’ register of interests.

Under new rules, former ministers must flag any new job offers within two years of leaving their post to the government’s advisory committee on business appointments (ACOBA).

ACOBA advises if there could be any “suspicion of impropriety” in the appointment.

The committee waved through Mr Law’s application, which said he had had “no official dealings with Ark”.

In a letter to the former MP, Baroness Browning, chair of ACOBA, said: “You did not deal with the organisation directly while in office and there is no suggestion that they were treated any differently to other academy chains.”

The Cabinet Office and the DfE also said they have “no propriety concerns” about the appointment.

However, the committee said it was appropriate, given his former ministerial portfolio, for a “clear separation” between his role in the international division and UK schools system.

It imposed conditions including that he should not advise Ark on its UK operations and should not lobby the UK government for two years.

He has also been told he should not draw on any privileged information available from his time as a minister.

Mr Laws will advise Ark on the development of its global education programme, which includes supporting governments in developing countries to improve their schools.

He said: “It’s an exciting time to be involved in global education reform and I look forward to playing my part in the further development of Ark’s international programmes.”

Ark opened its first school in India this year, in partnership with the South Delhi Municipal Corporation, the local municipality, for pupils from the most underprivileged backgrounds.

Lucy Heller, chief executive of Ark, said: “He brings a wealth of experience and nous to Ark and will be driving forward our international work at a pivotal time.”