After 14 years of silence, the government will finally publish brand new data on the mental health of young people in October, Schools Week can exclusively reveal

No data on the prevalence of mental health issues among children has been collected since 2004, a gap that has been branded as “wholly unacceptable” by the Liberal Democrat MP and former health minister Norman Lamb.

In 2015 Lamb told Schools Week that he had secured funding for a new prevalence study to be published in 2017, but it was pushed back after delays. The survey will finally see the light of day in October.

The NHS has refused to give an explanation for why the process has taken so long. The Department for Health did not respond to requests for comment.

Proposals released in a green paper last year said the government would establish “senior mental health leads” to work in schools from 2019, however a subsequent joint report between MPs on the education and health committee tore into the proposals, insisting they would put additional pressure on teachers without providing schools with extra resources.

“Not only do the proposals ignore the early years, they also fail to take into account the strong emerging evidence about the effects of trauma, neglect and abuse in childhood,” he said. 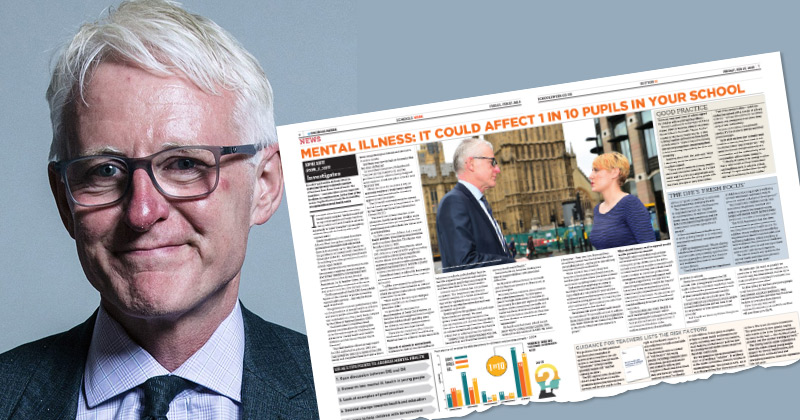 The last data on came out in 2004, before which it had been collated on a five-yearly basis by the Office of National Statistics. Labour prime minister Gordon Brown delayed the 2009 collection, and it was never rebooted once the coalition government took over in 2010.

Since then governments have “effectively been operating in a fog”, Lamb said, without any real idea of the numbers of young people who need support.

In 2004, one in 10 children had a mental health problem, with most having emotional and or conduct disorders.

The chief medical officer raised concerns about the missing data in 2012 and suggested there had been a rise in level of psychological distress and self-harm in young people.

Sarah Hannafin, a senior policy adviser at school leaders’ union NAHT, said pressures on young people have “in many ways increased” and believes it is vital to know the number children affected by mental health issues, what those issues are and their severity.