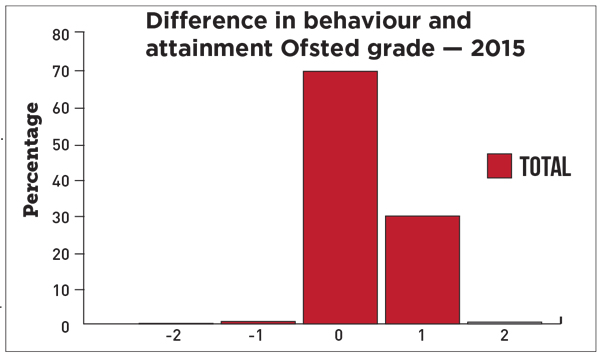 When executive headteacher Geoff Barton was told by an Ofsted inspector that his school’s behaviour grading was limited by its low attainment grade, he complained to the inspectorate. Exclusive analysis by Schools Week suggests he was right to do so.

Writing in the TES Mr Barton last week revealed that an Ofsted inspector said Hardwick Middle School in Bury St Edmunds, Suffolk, could only score a “requires improvement” rating for pupil behaviour because its previous exam results had not been good enough.

His horror at this pronouncement was one of a number of criticisms levelled at Ofsted in the article written to highlight the “devastating personal price” paid by headteachers at the mercy of the education watchdog.

But analysis by Schools Week has found that nearly a third of schools inspected this year have scored a higher grade for behaviour than attainment (see graph).

The figures cast doubt on any claims that attainment levels obligate inspectors to hold back their behaviour score.

Since January 1, 669 inspection reports have been published for primary, secondary, all-through and special schools, according to data collected with the help of Watchsted.com.

Of those, 70.46 per cent were given the same grades for attainment and behaviour.

But in 28.65 per cent of cases, the behaviour grade was better than the achievement grade.

Further analysis of the 448 schools receiving a grade 3 for attainment shows that more than half of them scored a grade 2 for behaviour.

Mr Barton asked the inspectors to re-evaluate their grading and made an official complaint after they refused to budge, but his complaint was not upheld.

Ofsted has refused to comment specifically on Mr Barton’s claims. But a spokesperson said that the watchdog does not “have a policy that limits the judgment on behaviour and safety because of previous attainment”.

She said: “Inspectors are guided by the school inspection handbook and would, when judging behaviour and safety, consider the extent to which pupils’ attitudes to learning help or hinder their progress in lessons.”

They include whether pupils’ attitudes to learning help or hinder their progress and pupils’ respect for the learning environment.

However, Mr Barton rebuffed the argument that the behaviour grade reflected attitudes to learning.

“It is this very narrow definition of what behaviour is . . . that it is about behaviour for learning. In some schools with high grades you will see utterly compliant behaviour and it’s not really about learning.

“If you asked parents what they mean by behaviour this is not what they would say.”

Hardwick Middle School will close in 2016 as Bury moves toward a wholly two-tier school system.