The government stands accused of starving councils of cash to help SEND pupils, after the number of pupils without a school place more than doubled in a year.

Kevin Courtney, the joint general secretary of the National Education Union, said today that it was an “absolute disgrace” that councils did not have the resources they need to help children with special educational needs and disabilities, and demanded action.

Government data shows that the number of pupils with a statement of SEND or an education and health care plan (EHCP) who were “awaiting provision” – meaning they are not in school – soared from 1,710 in 2016 to 4,050 last year, an increase of 137 per cent.

The number of pupils with SEND who were permanently excluded from school and not yet placed elsewhere also rose from 39 to 102 over the same period.

“There is a real problem with special needs funding. This is one demonstration of it,” said Courtney, who warned that children are at home “because local authorities don’t have enough money to provide suitable education”. 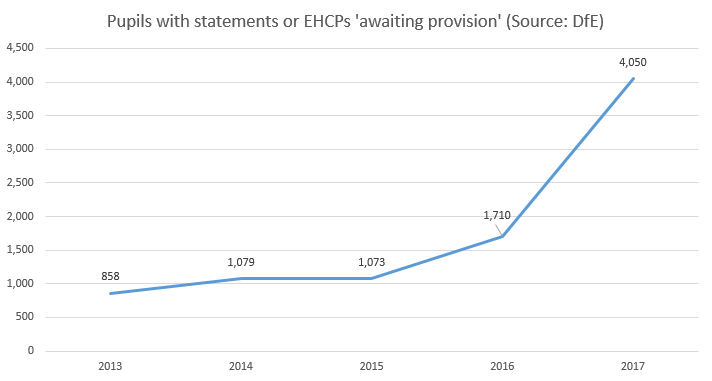 “Local authorities are being placed in an impossible position. They have a legal duty to plan high quality education for every child with SEND, but cuts have taken away the resources they need to educate children with complex needs.

“Extra money is urgently needed for SEND but it must be new money and not come from the already challenged school budgets. Parents and teachers are in despair.  The government is failing thousands of children and families and must act now to resolve this critical situation.”

Education and health care plans were first introduced in 2014 and will eventually completely replace statements, although some areas have seen delays in the transfer process.

A DfE spokesperson pointed to cash-terms increases in funding, claiming that local authorities “now have more money for every pupil in every school”.‎

“Our new education, health and care plans are putting the views of young people with special educational needs and disabilities and families at the heart of the process so they can help shape the support they receive. This is a hugely significant reform but local authorities are rising to challenge and have reviewed almost 222,000 cases with initial inspections showing positive outcomes for young people.

“We will continue to work with councils to ensure the new EHC plans are of the highest quality.”