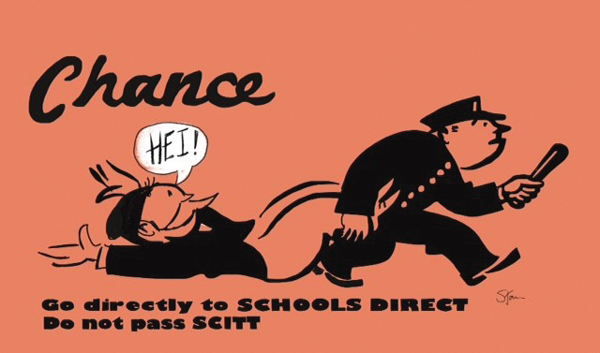 In the past week, higher education institutions (HEIs) have been banned from recruiting trainee PE teachers for next year. Recruitment for history teachers was expected to halt yesterday.

The move has left many prospective teachers with no alternative to school-based training.

Government imposed “caps” have been placed on the number of trainees HEIs can recruit next September in a bid to provide “moderate growth” in school-led training routes, such as School Direct (SD) and SCITT.

When universities reach their cap they are supposed to encourage remaining applicants to apply for training places within schools.

Professor John Howson, an education statistician who runs job website TeachVac, said the situation was a “shambles”, adding: “It does not seem like the implications have been thought through and the new system appears to have been invented on the hoof.”

Initial teacher training (ITT) figures for this year, released last Thursday, show universities continue to be the preferred route and that school-based routes are undersubscribed.

The first axe fell on PE trainees. The government wants to recruit 999, but HEIs can only recruit 397. They have met this cap, with many applicants already booked for interview now turned away.

School routes for PE have so far only recruited 185 trainees, although 602 are needed.

History was expected to reach its cap yesterday. More than 90 per cent of places were filled by Wednesday. HEIs have already offered twice as many places as undersubscribed school-led providers.

It is expected that bans will next be imposed on English and primary applications.

Alison Kitson, senior lecturer in history education at the UCL Institute of Education, said: “The impact is enormous. Applicants have been keen and they will be extremely disappointed as they are strong candidates”.

UCL IoE was now bringing interviews forward, she said, and was even flying an applicant over from Saudi Arabia for an interview today. Ms Kitson said interviews taking place after the cap would be offered waiting list places.

The situation has been made more difficult after the National College for Teaching and Leadership (NCTL) failed to send emails to providers when subjects reached 50, 75, 90 and 95 per cent of their targets. PE departments were only told when the cap reached 75 per cent capacity – and recruitment then closed overnight without warning.

The Department for Education (DfE) told Schools Week it would only keep providers informed “wherever possible”. An email sent to HEIs last week said: “Due to the very high volume of offers and acceptances within the last 24 hours we have been unable to provide you with 90 per cent and 95 per cent warnings.”

James Noble-Rogers, executive director of the Universities Council for the Education of Teachers, said the lack of communication resulted in applicants being turned away from interviews.

“It is unethical to treat prospective teachers in this way. Some have been turned away from scheduled interviews because insufficient notice was given of the recruitment cap being applied.

“Others have lost out because NCTL did not allow enough time for offers that were already in the system to be processed.

“The situation would have been much more manageable had NCTL not attempted to rig the market by constraining trainee choice and placing a wholly artificial cap on HEI recruitment.”

The DfE said the caps were introduced “in response to feedback from the sector” and gave providers more freedom and prevented over-recruitment.

Imagine Sam, who wants to be a secondary school history teacher, and would like to study for a postgraduate certificate in education (PGCE) at a university.

Sam, who lives in Newcastle, has booked trains to get to each interview, which has cost more than £100. Each interview is due to take place in the next couple of weeks.

Today, the National College for Teaching and Leadership emails all university providers telling them universities have met their cap and must immediately stop recruiting for history.

Where does this leave Sam? The three universities that have offered Sam interviews will not be able to offer a place – or they will face either recruitment controls, reduced allocations for future intakes, or withdrawal of accreditation.

Sam will have to find a place on another route; either through School Direct (salaried or fee-paying) or a SCITT.

Or, if Sam is determined to gain the PGCE via a higher education institution, then another of year of waiting will be on the cards and Sam will have to re-apply next year – losing out on the UCAS fee for application, and the money spent on train tickets for interviews.