Teachers in the most disadvantaged areas do not believe their pupils can afford the residential trips offered by their schools, exclusive research for Schools Week has found.

Analysis by the education think-tank LKMco showed pupils in deprived areas face a double disadvantage: they attend schools that are less likely to organise residential trips in the first place, and struggle to afford the few outings that are on offer.

Fewer than half of teachers in disadvantaged schools believed pupils can afford residential trips, but two thirds of teachers in schools with affluent intakes believe their trips are affordable to everyone.

What’s more, pupil premium funding provided to schools to help support children from low-income families does not appear to be solving the problem.

“While some schools are using the pupil premium to ensure no pupils miss out, this research has revealed that this is not the norm,” said Loic Menzies, the think-tank’s director.

“Our report therefore recommends that schools should be willing to use pupil premium funds to provide genuine equality of opportunity, not just to close attainment gaps.”

The findings are based on analysis of a school’s pupil deprivation levels, using the Income Deprivation Affecting Children Index – a measure of the proportion of children (aged 0 to 15) living in income-deprived families.

They have been excerpted from of a wider study published by LKMco and led by Menzies, on ‘The state of school residentials in England’.

Just one in five children who participated in the study went on a residential every year, and those in disadvantaged areas had the “fewest opportunities to participate”.

“On average, educational establishments organise 2.5 residentials per year. We therefore estimate that approximately 1.8 million children and young people are involved in residentials each year.

“This is equivalent to 21 per cent of the school pupil population,” the report said. 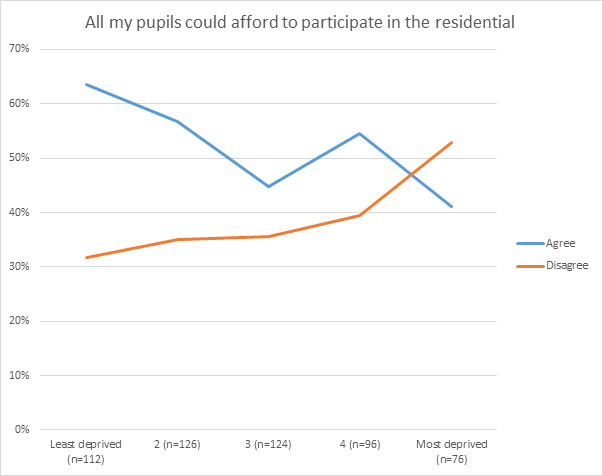 It found that “schools are attempting to address the problem of poorer pupils being excluded from residentials, often by using the pupil premium”, but added that “even where teachers try to make residentials affordable, they still consider cost to be a barrier to participation”.

“As funding is squeezed, this will become an increasing problem,” it said.

Paul Whiteman, the general secretary of the school leaders’ union NAHT, described the benefits of residential experiences and outdoor education as “indisputable” and said it was “distressing to learn that they are not available to all students”.

“At our annual conference this year, delegates voted in favour of campaigning for protected funding to enable all children to have access to high quality outdoor education and residential experiences,” he said.

The researchers used the Evolve database, a system used by 25,000 establishments to organise trips, to gauge the availability and purpose of residentials.

A school survey was then distributed three times throughout 2016-17 and a total of 1,185 schools responded to the survey, nearly three quarters of which were primary level.

Its main recommendation was for more funding to improve fair access, though it also asked schools to consider “lower-cost options”, “targeted and universal subsidies” and “flexible payments”.

The report was funded by campaigning group ‘Learning Away’, which is running two national campaigns called #BrilliantResidentials and #WinterResidentials to help schools make trips more inclusive.

A Department for Education spokesperson said: “Schools should consider the affordability of any trips they plan to ensure no-one is unfairly disadvantaged.

“Schools are best placed to understand and respond to the specific needs of their pupils. This is why we have given them flexibility over how they use the pupil premium funding to help improve the progress and attainment of their disadvantaged pupils. This can include covering some or all of the costs of going on a residential trip, if the school believes that this will help improve a pupil’s academic outcomes”