The Department for Education’s chief scientific adviser has issued a “clarification” on controversial comments he made about his involvement in school reopening plans.

Speaking at the science and technology committee, earlier today, Osama Rahman said he had not assessed the effectiveness of government guidance published yesterday on how to reopen schools safely.

When later asked about the transmission of the coronavirus and whether the plans were “putting together hundreds of potential vectors that can then go and transmit?”, Rahman said: “Possibly, depending on school sizes.”

He also said the decision to reopen schools was made by cabinet, not the DfE.

But in a letter sent to the committee this evening, published by the department, Rahman said he has “full confidence” in the plans, “subject to the conditionality of the five tests, including a decreasing transmission rate”.

He added he was involved “in all parts of the guidance recently published by the Department for Education and fed in at various stages”.

He said he and his team have been “closely involved in advising on the government’s position on reopening education institutions”, including being at “all meetings of the children’s task and finish working group, a sub-group of SAGE, which has made a key contribution to the recent decision”.

“Throughout, the Department for Education has been led by the science at all of these key decision points and that will continue to be the case throughout this pandemic.”

The letter was published to “offer some important points of clarification in case my position is misrepresented”.

But Vix Lowthion, the Green Party’s spokesperson for education, said the clarification was “strong arm revisionism” that “read like something from a totalitarian state”.

Carol Monaghan, the SNP’s education spokesperson and a former teacher, had told the committee earlier that she “did not think the profession will be satisfied or put at ease with what they are hearing”. 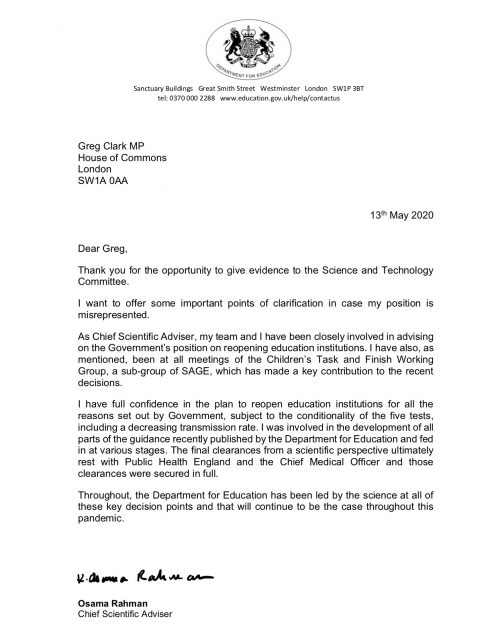