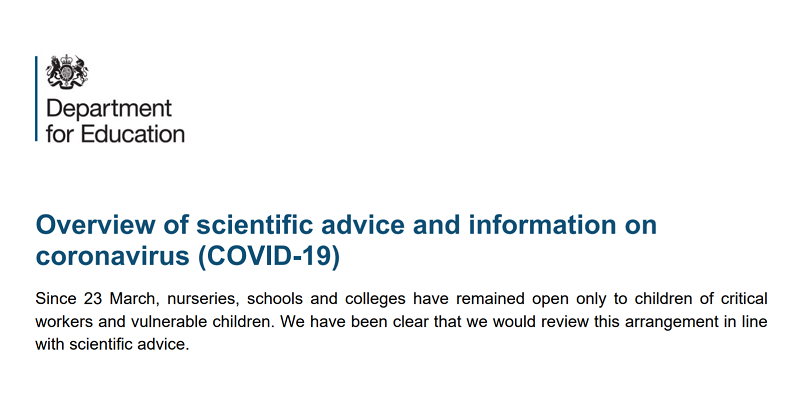 The Department for Education has finally published an overview of the scientific advice it has received.

The document, released today, summarises advice from the government’s Scientific Advisory Group for Emergencies (SAGE) and its Children’s Task and Finish Working Group.

However, it does not include evidence from SAGE or the sub-group, which is being published separately.

It follows repeated calls from school leaders, union bosses and opposition politicians since the government announced it wanted to begin the phased opening of schools on June 1.

The document states that the “exact rates of infectivity and transmission of children is not fully known yet”, and that because this is a “novel virus”, the scientific understanding is “developing all the time”.

However, the document states that the “current understanding” is that there is a “high degree of confidence” that the severity of disease in children is lower than in adults.

There is also a “moderate to high degree of confidence” that the susceptibility to clinical disease of younger children (up to age 11 to 13) is lower than for adults. But for older children, there is” not enough evidence yet to determine whether susceptibility to disease is different to adults”.

There is also “no evidence to suggest that children transmit the virus any more than adults”, the document states.

“Some studies suggest younger children may transmit less, but this evidence is mixed and provides a low degree of confidence at best.

Meanwhile, the document also reveals that social distancing has not been factored into the models considered by SAGE. It repeats earlier DfE guidance admitting that young children cannot be expected to observe social distancing measures of remaining two metres apart.

Instead, a “hierarchy of controls” will create an “inherently safer system, where the risk of transmission of infection is substantially reduced”, the document claims.

The document also states that schools should be “especially sensitive to the needs and worries of BAME members of staff, BAME parents and BAME pupils”.

It states: “The exact reasons for the increased risk associated with coronavirus (COVID-19) in BAME populations are not known, and there are a number of factors that could underlie this.”

Errors suggest document was rushed out

Bizarrely, under the heading ‘spread and vulnerability to disease’, the document also contains erroneous text which talks about “testing subjects”.

A search of DfE documents shows this line is actually from a 2014 key stage 4 science consultation.

One passage of the document states that “in the event of a child or member of staff testing positive for coronavirus (COVID-19), the relevant group of people within the school with whom the child has mixed closely (their cohort), should be sent home and advised to self-isolate for 7 days”.

However, a later paragraph states that in the same situation, they should be sent home and advised to self isolate for 14 days.

Update: The Department has replaced the document, removing the erroneous text. However, the conflicting statements over the period of isolation remain.