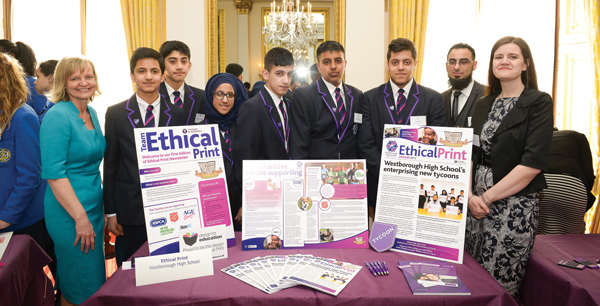 Primary pupils can now enter the Dragons’ Den for the first time.

Tycoon in Schools, an annual enterprise competition run by “Dragon” Peter Jones’s charity foundation, challenges pupils to set up their own companies.

Each team submits a detailed business plan and is given a loan of up to £1,000. Team members then have to generate as much profit as possible during a set trading period.

This year, it is open to primary as well as secondary schools.

Foundation chief executive Alice Barnard said: “After the incredible success of Tycoon in Schools 2014, we are more excited than ever. We encourage as many schools as possible to get involved and reap the benefits of this practical experience.

“We opened it to primary schools so that we can share the rewards of enterprise education with younger children.”

Last year’s top prize was split between three finalists at a ceremony at Buckingham Palace this March.

Pic: One of the three victorious teams from Tycoon in Schools 2014, Ethical Print