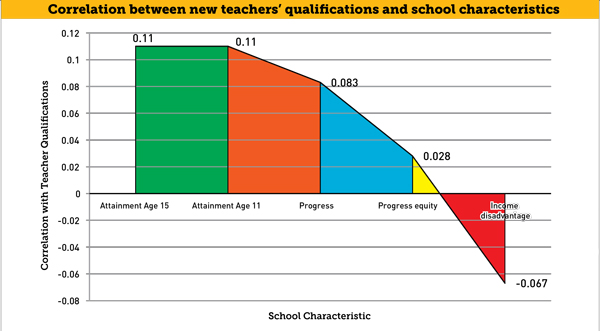 Highly qualified teachers are more attracted to schools serving the wealthiest and highest attaining pupils, research suggests. Sophie Scott looks at how this affects learners in more deprived schools, and what can be done to correct the imbalance.

Narrowing the achievement gap between rich and poor pupils has been a priority for more than 40 years. Increased funding for pupils on free school meals – via the pupil premium – is the latest innovation. But spreading teachers across the country may prove to be equally important.

While working at the Institute of Education, John Brown analysed the flow of new teachers into schools to see if there was a link between degree outcome and the socioeconomic make-up of the schools that appointed them to their first post.

Essentially, highly qualified teachers prefer to teach in schools achieving low progress with affluent pupils than ones achieving high progress with disadvantaged pupils. Or, to put it more strongly, the smartest teachers seek out the “coasting” schools maligned by Nicky Morgan this week.

Mr Brown says the lack of available information makes it nothing short of a “miracle” that he was able to come to this conclusion. His research used data from the General Teaching Council and the Teacher Development Agency to analyse a teacher’s grade in their undergraduate degree alongside primary and secondary schools results between 2005 and 2009. It also considered the percentage of pupils recorded as living in households eligible for welfare benefits and/or with an equivalent household income of less than £16,000. (Mr Brown’s study uses a dollar equivalent of $25,146.)

To update the research, however, he needs access to information that is now much more difficult to get. But Mr Brown believes his original data, although a year old, shows something important about teachers’ employment choices. “There is a distinct problem with the distribution of teachers across schools,” he says.

Professor Simon Burgess, of the University of Bristol, whose 2009 research paper found that the quality of teachers affects pupil progress, agrees that distribution of effective teachers is important but questions whether high degree results necessarily mean someone is an effective teacher.

“In common with a lot of US analyses, we found that teacher effectiveness was not correlated with the teacher’s own academic record. Some new US research is now questioning that earlier finding and this is where the research frontier is: can we find characteristics that reliably and usefully predict effectiveness?”

He welcomes Mr Brown’s research as a useful piece of new evidence but points out that it is not a causal study but merely a correlation.

“The key question is whether the higher qualifications are associated with higher effectiveness, and that is not something that this study can answer.

“Of course, teachers’ preferences are not observed directly in this study, rather it is an analysis of which teachers work in which schools, and this is interpreted as reflecting teacher preferences. But there are obviously other labour market issues in play, and the sample is not very large.”

Heath Monk, chief executive of The Future Leaders Trust, which is working to place talented leaders in challenging schools, says that changes in teacher training are worsening teacher spread. “Before, you had a market that was dominated by HEI [higher education institutions], which at least had a level-playing field, but now you have teaching schools. The danger is, as they are the higher attaining schools and they have the outstanding Ofsteds, you have put the hands of the supply to those schools, giving them a double advantage. Teachers are being trained in the schools that have the characteristics [that the paper suggests teachers prefer], which is adding to the problem.”

Mr Brown believes teachers are attracted to high-attaining schools partly because they believe such schools provide an easier life.

“But teaching is about bringing children forward – that’s defined by progress.

“So this result is somewhat negative from that point of view as it suggests that teachers have some greater attraction to teaching in easy or pleasant classes.”

How can schools get highly qualified teachers into schools that need them? Mr Brown argues for incentives and points to Teach First as a model working to overcome the inequity of teacher distribution.

Teach First places high-attaining graduates within challenging schools where they teach for two years while completing their training.

The programme’s director of graduate recruitment, James Darley, says it has played a part in “raising the status of the profession with teaching in schools in challenging circumstances”. Teaching was now one of the most prestigious careers for the country’s graduates and career changers.

Mr Monk tentatively agrees: “Teach First is a godsend to schools, but how do we get incentives for people to stay in those schools?”

Mr Brown is optimistic that other policies could encourage a greater spread of teachers.

“There needs to be incentives – pay, status or career development related. It would be great to hear discussion about them. The reality is that working in a challenging school is a challenging consideration to take on when you are training as a teacher.”

Professor Burgess, however, is more prosaic: “It is likely to be true, if unhappy, and unsurprising … that pupils from disadvantaged families on average are taught by less effective teachers.”

Explainer from the author How Bristol solves its recruitment crisis