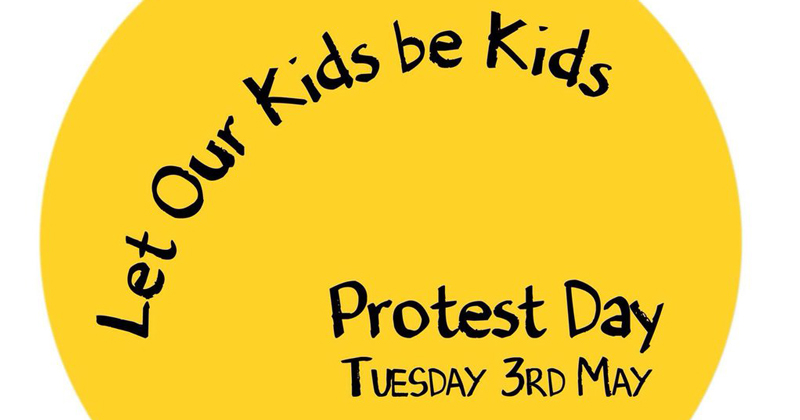 Children all over England are being kept off school today, in protest at “a school system that places more importance on test results and league tables than children’s happiness and joy of learning”, according to organisers.

In Brighton a rally attended by Children’s laureate Chris Riddell has attracted more than 500 parents and children, and local primary schools are reporting a “handful” of absences.

In the last month more than 44,000 people have signed a petition supporting a boycott of year 2 Sats by teachers, and many parents pledged to keep their children off school today as an act of protest over new national curriculum tests due to begin next month.

A map of events hosted on campaign website Let Kids Be Kids showed hundreds of events taking place all over the country.

Children’s author and political cartoonist Mr Riddell, who spoke at the event, argued that rather than focussing on testing, more emphasis should be placed on issues such as protecting school libraries and librarians.

He said: “The children are being put under undue stress and my argument is what is the value of what comes from this testing. I think it is questionable.

“We should be turning children into readers with the pleasure that gives rather than relying on a testing culture.”

Freelance journalist Amy Hall has posted pictures of the event.

Ben Ramalingam, from Brighton, is keeping his five-year-old son off school in protest at what he says is a learning environment that has made young children “disengaged and stressed”.

He said: “We are concerned parents taking a stand, we don’t want our kids to be stressed out by the time they become teenagers because they have been inappropriately taught. Our children are being pushed towards rote-based learning. It is like something out of Charles Dickens.

“We feel we need to send a message to Westminster and Whitehall that enough is enough, they need to see that the actions they take have a highly negative impact.”

Jane Clout, a grandmother from Brighton, who is keeping her two grandsons, aged six and eight, off school in protest at the tests, said the current state primary system was “like going back to the 1950s.”

She said: “Some of my grandson’s friends have been in tears at night, some of them have been having tummy aches which is a sign of stress. It is just so sad.

Aldrington CE Primary School, in Hove, reported “a handful – about four” pupils were absent due to the boycott, and Stanford Infant School, which is adjacent to Preston Park, has recorded two.

Headteachers will have to decide whether to record pupil absences related to parent protests over this summer’s SATs as authorised or not and if unauthorised, whether to issue fines.

However, Members of the National Association of Headteachers executive said at the union’s annual conference in Birmingham this weekend that while it wouldn’t be “fair” for leaders to authorise absences on the grounds of protest, breaches would not necessarily lead to action against parents.

Johnny Luk, CEO of the National Association of College and University Entrepreneurs (NACUE) criticised the current “very academic based” curriculum and said schools should be instead providing practical training as a foundation for a more academic focus that could be built on top.

He said: “There is very little value in my view, in asking students in Key stage 1 and 2 to do all these pointless tests, it’s an elitist system that puts students into categories and wastes teaching time and is an example of top-down control.”

Shadow education secretary Lucy Powell said she did not condone the action but claimed ministers had “ridden roughshod” over the concerns of head teachers and parents about Sats.

She said: “This Government is creating chaos and confusion in primary assessment in schools, with a huge number of changes to Sats specifications since children started school last September.”

Education Secretary Nicky Morgan warned that missing school even for a single day would be “harmful” and called for those behind the “damaging”campaign to reconsider.

In a speech on Saturday, she said: “What are the limits placed on a child’s imagination when they cannot write down their ideas for others to read?”

Schools minister Nick Gibb said: “These tests are vital in helping schools to ensure that young children are learning to read, write and add up well.

“The truth is, if they don’t master literacy and numeracy early on, they risk being held behind and struggling for the rest of their lives.”

The NUT at its conference in March called on education secretary Nicky Morgan to cancel the tests due to take place this summer for both key stage 1 and key stage 2 pupils.