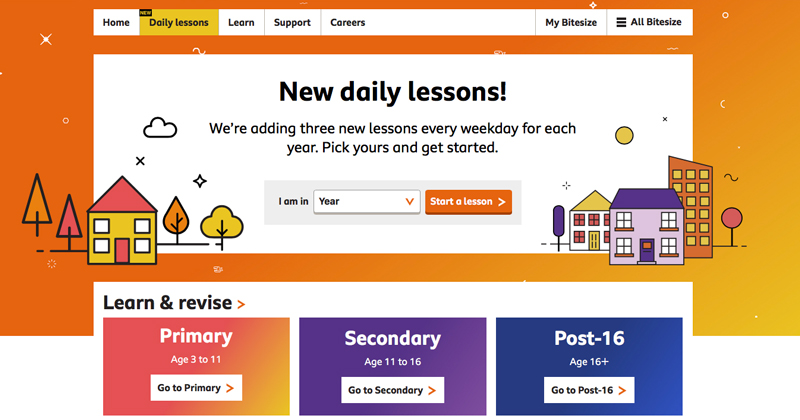 The BBC is under pressure to axe access to its home-learning lessons – used by millions of children during the coronavirus crisis – over fears they will squeeze commercial curriculum providers out of the market.

The British Educational Suppliers Association is seeking written assurances that the national broadcaster will wind down its beefed-up education offerings amid claims they may breach competition laws.

One of the demands is for the BBC to remove lessons from its Bitesize website from the first day of the summer holidays.

But Lee Elliot Major, professor of social mobility at the University of Exeter, said: “Any move to withdraw the BBC’s online resources for home-learning would be a retrograde step as it is increasingly clear that children will be continuing to learn online for an extended period, stretching into the new academic year.”

The BBC’s additional education content is a key part of the government’s offerings for pupils who are unable to attend school. BBC director general Tony Hall said it was the “biggest education effort the BBC has ever undertaken”.

Figures released by the BBC show its Bitesize website registered 5.2 million hits in the first week of lessons.

James Turner, chief executive of the Sutton Trust, said the BBC’s service was “especially important” for teaching the poorest pupils, particularly the lessons on TV for those without their own phone, laptop or internet connection.

“The impact of school closures will not be temporary, nor should the spirit of collective endeavour and national effort that has been so good to see over the last few weeks,” Turner added.

But BESA wants the BBC to put in writing its commitment to stepping away from the market when schools reopen.

The trade association, which represents 400 UK online curriculum content providers and education publishers, outlined five demands in a letter sent to Hall in April. It is understood the BBC has yet to officially respond.

BESA wants the BBC to start removing all additional home-learning content (known as “tombstoning”) from the Bitesize webpage and app from the first day of the summer holidays (July 22). They also want a content lock on iPlayer to ensure that once schools reopen this can’t be used as a teaching aid in schools.

On the former, it’s understood the BBC has committed verbally to removing the content, but will wait for further information on when children will return to ensure they are not left without support.

BESA, along with education software firm RM, took legal action against the BBC in 2003 after the government awarded the broadcaster £150 million to provide free material to schools under the “digital curriculum”.

BESA reminded the BBC of its legal obligation, highlighted during that case by the European Commission, that it is “not exempt” from competition law and should set out how its education service will be “distinctive and complementary” to those provided by the commercial sector.

Caroline Wright, director general of BESA, said while they are supportive of the BBC’s work during the crisis, they want to see a “normal operating process” after the closure period to “reduce the risk of permanent market distortion”.

When launching the new service in April, the BBC promised 14 weeks of educational programmes and lessons to “every household in the country”. As well as the online lessons, that included daily education programmes and content such as videos, quizzes, podcasts and articles.

In the letter, Wright stated while she understood such a move was necessary, the BBC should now “give serious consideration to the future of those educational suppliers whose main service offering consists of curriculum-mapped audio-visual content”.

When asked if BESA had similar views on that project, Wright said it was a “very helpful initiative” that the group would be “pleased to support”. But she pointed out that “when back to normal” any government funding for such initiatives should be “as clear and transparent as possible”.

The DfE did not want to comment. A spokesperson for the BBC they’ve had “very positive and open conversations with BESA… We are thankful of theirs and their members’ continued support, which underpins so many of our lessons, and look forward to continuing to work with them as the service rolls on.”