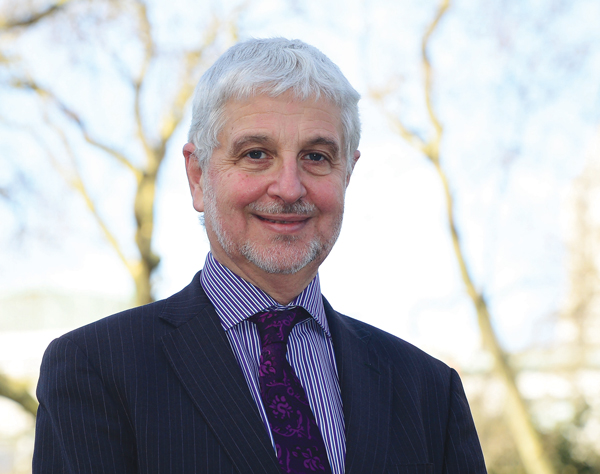 Two weeks ago, just before an education debate in a small room near Westminster, a murmur whipped round the gathered crowd. Brian Lightman, the mild-mannered general secretary of school leader union ASCL, had stepped down “with immediate effect”.

The news came from the union’s press office and everyone in the room – many of whom are among the first to know education news – looked surprised. Was he ill? Did he jump? Had he been pushed?

Two weeks later and Lightman, in characteristic suit and tie, still carrying his briefcase, is having lunch in Cooper’s, a small restaurant near the Royal Courts of Justice in London. It is a place he has visited twice before and is conveniently near the train station that trundles between the capital and his home in Leicester.

He squirms when asked what happened. He refuses to talk about it and begins to turn red. He looks down at the table, briefly, before looking back up – clocking me straight in the eye – and refusing again.

What he does say is that in the past two weeks he has joined his local library, and cooked a lot (“I’m quite good at beef goulash”). He also says that he could still remain a member of ASCL. “I could be an associate member, I might do that. I wouldn’t want to sever links with ASCL.”

“All I want is to help change things for the better”

Union leaders are often portrayed as belligerent souls: appearing on telly to knock 10 bells off politicians during strikes or pay negotiations. This characterisation isn’t fair of most teaching union leaders, but it is particularly inappropriate for Lightman, with his quiet voice.

“Being an angry person on TV is never what I would want to be seen as and not what we spent time on. What we did at ASCL was try to influence policy makers.

“Most of my time was spent engaging, proactively, making suggestions and giving feedback about how we would like to see things improve. Certainly in the last couple of years government has been very open to that.”

The “last couple of years” is a notable phrase. He found the coalition’s education department, led by Michael Gove, to be very adversarial, with ministers and advisers acting dismissively.

He seems sad at the memory. “We were not given the opportunity to engage in policy as it was being developed

“As professionals – with a lot of experience, representing a lot of people – union leaders have a lot to offer and one thing officials appreciate is we can tell them that if they do things a certain way in schools it won’t work, but if they do it another way, then that’s going to have an impact.”

He sees a more open culture in the present ministerial although he is still scathing about many reforms – the EBacc, A-level reforms, accountability measures. Nevertheless, Lightman believes good work is also being done. Brian at his desk at St Cyres School

He is particularly pleased that character education, “or the wider aspects of schooling as I would call it”, is becoming a dominant theme.

As a modern foreign languages teacher, it is a surprise that Lightman is so vehemently opposed to the EBacc given its role in encouraging more pupils to study languages. But perhaps his own schooling provides the answer.

Raised in Dulwich, south London, and the only child of two working parents – a civil servant, and a primary teacher – Lightman first attended a state primary but was removed after being treated “as if I was retarded” because he was left-handed.

He moved to an independent primary before attending Westminster City School, then a grammar and now a foundation secondary school. His mother taught in Kennington, a somewhat rough round the edges part of south London at the time.

“The children she taught were mostly white working class, largely Irish immigrants. There was a lot of child abuse and financial poverty, and it was an eye-opener.

“Sometimes our term times were different and she would take me into school and I would witness children coming into school, really beaten, and arriving in school a terrible state.

“School was the only constant in their life. It shaped my view that a school is so much more than just the content of its curriculum.”

At school Lightman enjoyed playing the violin in orchestras, something he says helped him overcome his shyness, and would spend his lunchtimes traipsing to travel agents with friends to look at brochures of exciting places. “That was a big influence in me being a modern languages teacher.”

His A-levels did not go to plan, he admits. Why not?

“I was running the young Oxfam group,” he says.

Noting my disappointed face, he laughs: “You thought I would say girls, didn’t you?” (I did).

“Okay, I will tell you the truth of it … there were these fantastic rock concerts going on. We were running helium balloon races for Oxfam … it was great work – a really good thing, we raised a lot of money – but we also got into these concerts. So we saw the Beach Boys, Led Zeppelin, Joni Mitchell: all the greats!” Brian on a caravanning holiday in the south of France

After a gap year, and some charming of admissions tutors, Lightman studied at Southampton and made the decision to become a teacher despite a careers adviser telling him he should be an accountant.

“I’ve never looked back,” he said. “I loved it. I loved interacting with pupils, laughing with them. I loved when they learned something that was difficult and they mastered it. And then I loved leading staff and developing other schools. It was great.”

He says the same of being a union leader. “It’s not a job I ever dreamed I would have … but I loved it. I enjoyed working with members, speaking to heads, engaging with them, the writing, conferences, and policies.”

The day after he left his job, what parts did he wake up glad that he no longer had to do? “Nothing. Every job has aspects that are less good, but if there were aspects of the job I hated I wouldn’t have carried on doing it.”

It’s a straightforward answer. In the last few weeks, as people learned about his role change, he says he was heartened how many of them described “[my] passion for education, my integrity and that I am honest”.

This claim is tested when I ask about the court case he led against exams watchdog Ofqual after school leaders were shocked to find GCSE English grades dipped significantly in 2012. The judge sided with Ofqual and the case was lost.

He makes no attempt to wriggle out of it or obfuscate the truth: “We lost. The profession lost and the problem [of qualification reform] is still there and we have to move on and ensure the profession can have confidence in exams.”

How can this be done? Lightman strongly believes in networks. One of the main attractions to joining the union, he says, was the opportunity to rub shoulders with leading education thinkers. But he worries that important ideas are being cast aside unnecessarily when people could instead learn from them. “There is a generation of teachers who have come through the coalition period who dismiss things from the past, but not everything the Labour party did was bad. There are things maybe they wouldn’t do again on reflection, but that will be true of this government. I think we should be learning from all generations.”

By the time the meal is over I want to ask, one more time, about what it’s like to be in charge of a union. He gives one final lesson: “Someone once said, ‘Whatever you think about people’s politics, don’t question their commitment to making the education system better’ – and that’s right. I have conversations with ministers, and I disagree with them, but I don’t ever question their commitment.

“All I want is to be part of the discussion and help change things for the better, if they need changing at all.”

In future he says he will be “part of the discussion” by looking to coach new heads and considering other opportunities. You get the sense he will miss doing it as a union leader.

I don’t have a favourite book. I suppose if I were going to be locked in a room forever and could only ever read one type of book again I would go for Thomas Hardy. It’s like he opens a crack in time, something happens and something goes wrong, and then the novel puts it back together again.

What’s the most memorable party you ever attended?

This is name dropping! My closest schoolfriend’s brother was in Genesis and so, quite often, we went to their after parties. I remember one where there were all these famous people there, I would be about 17, and I remember a band member of The Sweet – he was very charismatic with long blonde hair – and I didn’t know who he was! He was deeply offended.

What is your favourite childhood toy?

I was given a tape recorder, with reel-to-reel three-inch tapes, from a friend of the family. It was very generous. I was only eight or nine. I loved recording things and hearing them back.

I would go to places you couldn’t go to normally and hear what was going on. I think I’d hover in the corner of the Cabinet Office and find out what they were saying!